Who Shot Campus Carry? A Muth’s Truths Investigation – Part I

(Chuck Muth) – There’s a reason why so many people hold politicians in lower regard than even used car salesmen:

Folks, even if gun rights isn’t one of your big issues, the following long, sad, sordid story is worth a read if for no other reason than the understanding you’ll gain from discovering how your Nevada Legislature REALLY works – or doesn’t, as the case may be. 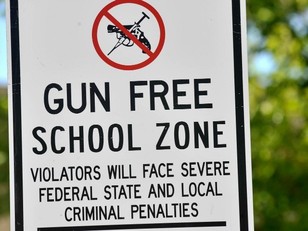 Unlike most of today McNews stories in the mainstream press, this one is long and detailed…so if the gun issue and the “inside” legislative process is of no interest to you, stop reading right now.

For the rest of you, onward…

The issue is “campus carry.”

Campus carry simply means that people lawfully licensed (CCW) to carry a concealed handgun with them would be allowed to exercise that right on college and university campuses in Nevada, where they are presently prohibited.

The issue is particularly and emotionally relevant in Nevada because one of our own, Amanda Collins – a CCW permit holder for whom “Amanda’s Law” is named – was brutally raped in a parking garage at UNR in 2007 thanks to being disarmed by Nevada law.

The man who raped her went on to rape at least two other women and murdered one of them.  He now sits on death row.

And here’s the most important thing everyone needs to understand, especially anti-gun liberals wearing rose-colored glasses… 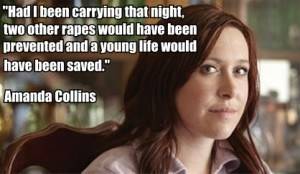 Rapists, murderers and thieves don’t give a damn about any law that says they can’t bring a weapon on campus.

They’re criminals; often animals.  Breaking laws is in their nature.

Back in the 2011 legislative session, Collins’ sacrificed her anonymity and came forward to tell her story and advocate for changing Nevada’s law so that the right of self-defense wasn’t checked at the campus door.

The bill passed with bi-partisan support in the Senate.  But was killed by Democrats, who had the majority, in the Assembly

It, too, was killed by Democrats who had the majority in the Assembly.

Fiore re-introduced the bill this year (AB148) – after Republicans won a historic majority in both houses of the Legislature, as well as the governor’s office, last November.

So passing this important gun rights bill in this new political environment should have been a no fuss/no muss/no-brainer.

And indeed, with 19 co-sponsors it easily passed in the Assembly in April by a vote of 24-15.

The bill then moved over to the Senate – the same Senate that approved the bill back in 2011 with bipartisan support, only with a few new members.

And if you count up the number of senators from both parties who voted for the bill and/or co-sponsored the bill while they were in the Assembly in 2011, you have more than the 11 votes necessary to pass it.

Again, this should have been a no-brainer.

For some reason, Senate Judiciary Committee Chairman Greg Brower (R-Reno), who voted for the campus carry bill in 2011, decided he was going to do to this year’s Amanda’s Law what Assembly Democrats did to it in 2011 and 2013.

He refused to bring the bill up for a hearing or a vote in his committee.

And his boss, Senate Majority Leader Michael Roberson (R-Las Vegas), who also voted for the campus carry bill in 2011, refused to pressure Brower to bring the bill up for a vote.

The stated reason – not the real reason – was that AB148 supposedly didn’t have the votes to pass.

Let me repeat, because this will become VERY important later…

By both Brower and Roberson…

Was that there weren’t enough votes for AB148 to pass in the Senate.

If true, it was ONLY because someone who supported campus carry in the past had flip-flopped on the issue and was now opposed.

And a recorded vote would expose who they were – with the main one, some suspect, being Brower himself.

It was also reported that two or more Republicans in the Senate opposed campus carry and begged Brower to protect them from having to cast a public vote on the issue, which absolutely would be used against them by gun rights voters in their next election.

A third suspected reason is that Gov. Brian Sandoval does NOT support campus carry and does NOT want a campus carry bill to hit his desk where he’d have to veto it. So Brower is just covering up and protecting the governor.

You see, Brower is a liberal Republican, a prickly Republican, and a weenie.  His philosophical compass always points left.

Fiore, on the other hand, is a conservative boat-rocker with, as she says, brass ovaries.

She doesn’t just vote “right.”  She leads the conservative charge.  She’s at the tip of the spear.  And doesn’t exactly observe all the “niceties” of being a legislator.

Indeed, if she ever uses phrases such as “my distinguished colleague,” it’s often dripping with sarcasm and disdain.

Instead she calls them out and says things to her squishy GOP colleagues like, “Put on your big boy underpants and take a stand!”

As such, Brower – and others – can’t stand Fiore.  They despise her.

And some – especially Assemblyman Chris Edwards, a weanie’s weanie – have been voting against some of her bills for no reason other than the fact that they’re her bills.

Whatever the real reason(s), AB148 died in the Senate when Brower refused to give it a committee hearing and vote before the deadline for bills to receive a committee vote two weeks ago.

But the Legislature is the living embodiment of the phrase, “It ain’t over ‘til it’s over.”

Veteran legislative watchdogs will remember the 2011 session, when then-Speaker John Oceguera (D-Las Vegas) – preparing for a congressional race against Rep. Joe Heck(R-Nevada) – literally “stole” a number of good gun-rights bills originally sponsored by other legislators, rolled them into one “omnibus” bill…and took credit for them.

Well, that’s the same thing Roberson – also said to be mulling a congressional race next year – did this session.

He “stole” a number of good gun-rights bills from fellow Republicans and rolled them into one omnibus bill…SB175.

And while all of the aspects of SB175 were good, one was more equal than the others: “Pre-emption.”

And most gun owners don’t even know these requirements exist.

If I have this wrong, somebody please clear it up for me and I’ll correct the record here in a future issue of Muth’s Truths.

But here’s the point…

The restrictions imposed in some jurisdictions in Clark County are different from those imposed by the State of Nevada.

What “pre-emption” means – and again, if I have this wrong, somebody please correct me – is that Nevada state law will take precedence over local ordinances when it comes to guns.

In other words, Henderson and Las Vegas will no longer be allowed to impose separate gun registrations or impose restrictions that are in conflict with Nevada state law. Nevada state law will “pre-empt” and local gun laws.

Bear with me here, because this “pre-emption” issue is a BIG part of this story, even though it might cause non-gun owners’ eyes to glaze over.

Pre-emption was one of the gun-rights bills that Roberson took and included in SB175, his omnibus gun bill.

So for political reasons, Roberson was deeply invested in passage of SB175 – which easily cleared the Senate back in March by a vote of 14-5, and then moved over to the Assembly Judiciary Committee, chaired by Assemblyman Ira Hansen.

(That’s an inside joke that only my friend and Democrat political consultant Ronni Council will understand).

OK, I have to take my daughter Jenna out to the animal rescue ranch where she volunteers on Saturday mornings, and then go watch my son CJ’s basketball game (and yes, living up to the stereotype, my little white boy can’t jump).

So I’ll have to continue Part II of “Who Shot Campus Carry?” later.