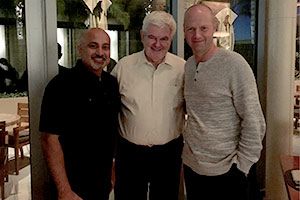 (Newt Gingrich) – We are in the middle of commencement season, as hundreds of thousands of young people graduate from college this month. Amid all the celebrations, nostalgia and lofty speeches, it’s worth remembering the challenging reality that far too many graduating students face. One fact in particular stands out: 70 percent of them leave college in debt, an astonishing $30,000 on average.

That would be a staggering amount of money for any young person to owe as they begin their working lives, but it is all the more alarming in an economy in which so many have trouble finding jobs at all–and an even harder time finding jobs in the fields they studied.

Tragically, the effects of graduating with large debts can hang over students for much longer than you might guess. The Gallup-Purdue Index, an extraordinary study of tens of thousands of college graduates, finds that these debts can affect people’s fundamental choices about their lives–decisions about their careers, about when to marry, when to have children, when to buy a house–in ways that may undermine their well-being for decades after graduation.

There must be a better way to make opportunity available to all Americans without permanently harming their well-being in other areas of life.

This challenge is one reason I was so excited to visit Udacity, a very innovative online education company, on a recent trip to California.

Udacity was founded by Sebastian Thrun, one of the creators of Google’s self-driving car project (which I have written about here and here). Sebastian and I had the pleasure of meeting several years ago and have stayed in touch since.

He is interesting in part because the self-driving cars are not only his only potentially world-changing breakthrough in recent years. As a professor at Stanford, he taught the world’s first massively open online course (or MOOC)–an artificial intelligence course that had 160,000 students worldwide, 23,000 of whom made it all the way through the advanced computer science course. As I describe in my book Breakout, Sebastian was stunned by the scale–and by the fact that the top Stanford student finished the course ranked 411th.

He realized he could be at the beginning of a revolution in learning, and founded Udacity to try to advance that cause.

Since its launch, Udacity has enrolled millions of students all over the world.

Udacity’s courses are very practical and focused on what students need to learn to get a job (mostly in technology but in other fields as well). In fact, Udacity likely teaches entry level programmers the skills they would need in the real world even better than some of the top-ranked university computer science programs, which tend to be overly academic and theoretical. Udacity has partnered with some of the industry’s top companies–Google and Facebook, for instance–to develop programs that produce graduates who actually meet employers’ needs.

At first Udacity tried to build partnerships with existing universities to offer a better product at lower cost. And it did have some success. Working with Georgia Tech, Udacity offers a $10,000 master’s degree in computer science from one of the best programs in the country. But for the most part, the old institutions of higher learning met the new technology with resistance and in some cases outright hostility.

So now the company has decided to work completely outside the traditional university system. Sebastian and his COO, Vish, told us about a new offering they call Nanodegrees. These are programs of study in very specific and practical subject areas–how to build iPhone apps, for instance–that certify the graduate has skills an employer might need. For $200 a month–a tiny fraction of an expensive college degree that may yet leave graduates unemployed–nanodegrees come with support from real mentors who can help students work through problems and steer them through the program to the end.

Needless to say, such a radical collapse in price has the potential to transform the lives and opportunities of people all over the world and at all stages of life.

It was thrilling to see Sebastian and get a glimpse of Udacity’s pioneering work reinventing education. I look forward to seeing the great things they will do and the opportunities they will create in the years to come.