What, oh what, to call politicians who flip-flop on an issue in a single day?

What, oh what, to call politicians who flip-flop on an issue in a single day?
N&V Staff 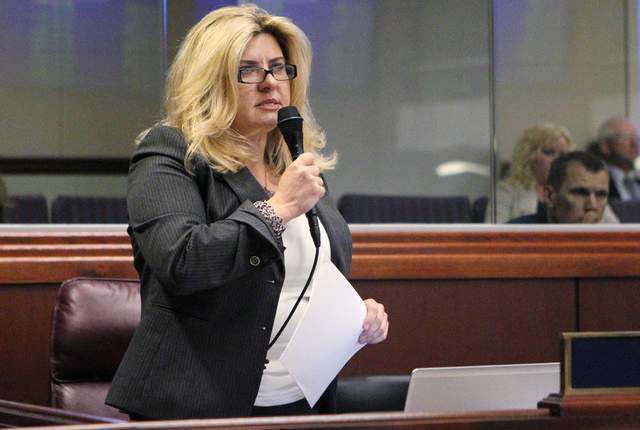 (Thomas Mitchell) – I can’t decide if they are dithering dolts or vacillating varlets or wavering wastrels.

Eight Republicans this week voted against amending a Senate bill to allow concealed carry permittees to carry their concealed weapons on college campuses, but seven of them later joined as sponsors of a new bill (Assembly Bill 487) that would accomplish the same thing, according to the Las Vegas newspaper account today. The Assembly vote against the amendment was 24-18.

Can’t tell whether they grew new spines or were kicked in the butt. The paper lists the seven changelings as Assembly members James Oscarson, Jim Wheeler, Melissa Woodbury, Derek Armstrong, Chris Edwards, Stephen Silberkraus and Lynn Stewart. Majority Leader Paul Anderson, who also voted against amending the Senate bill, is not listed as a sponsor.

On Friday conservative activist Chuck Muth sent an email missive listing the eight Republicans who voted against the “campus carry” amendment along with their phone numbers. He called them shameful and quoted another conservative activist, Tony Warren, as saying, “Remember these names. They are not worthy to serve as our representatives. Damn them to HELL.”

Muth included this detail of the events:

Our good friend Janine Hansen at Nevada Families reported on another aspect of this shameful display of betrayal and cowardice yesterday.

Assembly Speaker-of-the-Weak John Hambrick called for a voice vote on the SB175/AB148 hybrid gun bill.  He ruled from the chair that the vote was too close to call and ordered a “division of the house.”

The problem with that is that each individual legislator is allowed to escape casting a RECORDED vote in the official record.

So conservative Assemblywoman Michele Fiore – God bless her – stood up and asked for a roll-call vote.

Hambrick ruled her out of order and rejected the request.

Fiore than asked for a one-minute recess – a request that rarely, if ever, is denied.

(“So he (Hambrick) was in league with the anti-gun rights Republicans,” ((Janine)) Hansen wrote. “This is a disgrace!!! Why elect Republicans when they betray us on the most basic liberty issues like self defense?”)

Darned good question.  But back to Fiore…

After being shot down by Hambrick, the Las Vegas Republican immediately left the Assembly chamber and headed to her office where she called the lead lawyer at the Legislative Counsel Bureau (LCB),Brenda Erdoes, to ask if Hambrick really had the power to deny a request for a roll-call vote and/or one-minute recess.

But to give you an idea of just how paranoid and unhinged some folks are in Carson City about Fiore, apparently somebody thought she might have left the chamber to go get her gun and was afraid she’d come back and shoot the place up.

So, I’m told, legislative police were called to the first floor to secure the Assembly chamber and block Fiore from returning to her seat!

Eventually, Fiore was allowed back on the floor and later in the day rose and issued a statement, FOR THE RECORD, identifying by name the eight Republicans who turned tail and ran when the heat got too hot in the kitchen and sold out campus carry supporters.

The Review-Journal reported that Republican Assembly Judiciary Chairman Ira Hansen criticized the creation of the new bill as an effort to gain “political cover.”

“And that is a huge mistake politically, and it was the wrong thing to do, and they abandoned their own party’s base,” he is quoted as saying of the votes against the campus carry amendment. “And now what they want to do, is come back when it is not going to make any difference and they know it, and have me go through the whole hearing process again as we already did on (AB)148, to give them political cover.

“And I think it stinks, and I think we had a shot if they would have stuck to their guns. …

“So they chickened out, they caved in on the whole issue and now they want to come back and pretend like they are going to be the heroes and resurrect the bill.”

Fiore stormed out of the chamber after that vote was taken when Speaker John Hambrick, R-Las Vegas, refused to call for a roll call vote on the issue or stop the floor session for a brief time out.

She later returned and apologized.

Muth just posted a follow-up this morning under the headline: “Who Shot Campus Carry? A Muth’s Truths Investigation – Part I.”

In this posting Muth notes that Gov. Brian Sandoval does not want a campus carry bill to make it to his desk and force him to veto it and suggests certain Republicans are trying to protect him.

N&V StaffOctober 4, 2022
Read More
Scroll for more
Tap
A letter to the lawmakers
Who Shot Campus Carry? A Muth’s Truths Investigation – Part I