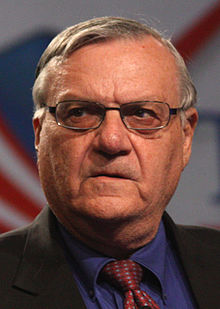 our 2017 Conservative Leadership Conference awards dinner and would by the recipient of our “Courage Under Fire Award.”

“Arpaio doesn’t belong in Las Vegas. He belongs in jail.”

I guess that means she won’t be sitting at the head table with us!

“Can only guess at the knuckle dragging droolers that would

actually pay to attend this massive display of idiocy.”

Then there was this grammar-challenged email I received from what I can only imagine was a star pupil at one of Clark County’s public re-education camps and maybe an intern in Rep. Titus’ office…

“What a despicable piece of DOG SHIT, you are.  You call the above people worthy of anything.  Nothing could be as bad as this group and not worthy of any mention in any publication of any kind.  This state does not deserve you, in any way. DISPICABLE.  WHAT KIND OF A HUMAN BEING WOULD BRING THAT Arpio to the state of Nevada.  Shows just what a low life group this is.”

That’s us!  A group of low-life “deplorables,” right Hillary?

And some still wonder why I’m known as Nevada’s #1 Irritator of Liberals?

Wait’ll they put two-and-two together and find out that Sheriff Joe is speaking on Saturday, September 16th, the same night as…MEXICAN INDPENDENCE DAY!

Shhhhh!  Don’t tell ‘em.  I wouldn’t want to get any more hate mail/tweets.

There’s an argument that it’s good for conservatives to read/watch liberal fake news programs so we know what the other side is saying.  And to a large extent I agree.

But CNN and MSNBC, not to mention the other major networks along with most of the big-city liberal newspapers, have devolved to something less than fake news over the past several months.  When it comes to President Trump, they’ve become HATE news.

The joke going around the internet – and it’s both funny and sad because it’s so true – is that if Donald Trump walked on water, the liberal news organs would report that he can’t swim.

Indeed, despite his near-flawless handling of the disaster in Texas, earlier this week the hate news sunk so low as to criticize First Lady Melania Trumpfor wearing high heels before she boarded the helicopter to travel to Texas even though she wore tennis shoes once on the ground.

These people are sick puppies.

There is enough negativity in life that I don’t need to invite it into mine by watching or reading hate news.  So I stopped following CNN on Twitter and refuse to watch it on TV.

And while I initially worried that I might miss something – I’m not missing anything at all.  Life is good again.

If you don’t think Nevada U.S. Sen. Dean Heller is running scared from the GOP primary challenge of Danny Tarkanian, you’ve got another think coming.

First, I attended Nevada Attorney General Adam Laxalt’s Basque Fry in Gardnerville last Saturday.  Over 3,000(!) conservatives and Republicans were on hand…including Danny and his wife Amy who were there in a campaign booth signing up volunteers the entire time.

Heller, on the other hand, didn’t show up until 15 minutes before the event ended and avoided the crowd by scurrying back-stage through the VIP tent so as to avoid the great unwashed grassroots activists.

But he wasn’t able to avoid me.  He opened our brief exchange with an insult.  I guess I just have that way with some people.  Go figure.

He then went on to explain to me that he, personally, was going to repeal ObamaCare with his plan to keep Gov. Brian Sandoval’s Medicaid expansion by block granting fed money to the states – as if this is any better.  Call it HellerCare.

Sorry, no matter how hard you try, you just can’t polish a turd.

Then, a couple days later, Heller’s camp released an absolutely absurd poll allegedly showing he was up a whopping staggering 22 points over Tark among Republican primary voters.  And if you believe that one, you probably still believe that if you like your doctor you can keep him.

Dean’s actions in opposing Trump last year, his vote not to repeal ObamaCare last in July despite the fact that it was the exact same bill he voted for in 2015, and his opposition to pardoning Sheriff Joe Arpaio tells me he’s dead candidate walking in the general election IF he makes it past Tark in the primary.

The #NeverHeller crowd in Nevada is large and growing.  In fact, one conservative activist I spoke with at the Laxalt event suggested this bumper sticker:  “Go with Tark or go to Heller.”

Nevada Gov. Brian Sandoval – “America’s Worst Governor” – continued his sell-out of Nevada’s conservatives and Republicans this week by signing onto a letter along with a bunch of Democrat governors urging Congress to retain ObamaCare’s mandate that every American buy health insurance or pay a fine through their tax return.

That provision has always been the most constitutionally offensive part of ObamaCare.  That our RINO governor supports keeping it is yet another reason that the End of the Sandoval Error can’t come soon enough.

Free-for-All Shaping Up in CD3

Nevada’s 3rd Congressional District has attracted three GOP candidates, all of whom have baggage weighing them down.

The front-runner, State Sen. Scott Hammond, voted for the largest tax hike in Nevada history during the 2015 session.  However, Sen. Hammond now intends to sign the Taxpayer Protection Pledge with Grover Norquist, father of the Pledge, as his witness at the Conservative Leadership Conference in two weeks.

Former State Assemblywoman Victoria Seaman, who voted for nine tax/fee hikes during that same 2015 session in violation of her signed Tax Pledge, has stopped “office shopping” and is also running in CD3.  Something tells me “trust” won’t be one of her campaign themes.

And former Clark County GOP Chairman Dave “For Himself” McKeon – with zero base of support other than a network of inside-the-beltway establishment types associated with his father, a former congressman – will be grasping for the brass ring with one hand while firmly grasping a bottle of snake oil in the other.

But if you’re not thrilled with these choices, keep your powder dry.  I’m hearing a fourth, very credible candidate, is seriously looking at throwing her hat into the mix.  Don’t know much about her yet, but I hear she’s talking with a very experienced/very successful campaign consulting firm about handling her race.

I’ll keep you posted as I learn more.

Despite the fact that conservatives have long argued that pouring more money into Nevada’s failed public schools won’t fix the problem, Gov. Sandoval shoved the largest tax hike in state history down our throat in order to dump boatloads of more money into these “failure factories.”

Nevertheless, the Clark County School District announced this week that it’s facing a $70 million budget deficit and is making plans for layoffs of “non-essential” personnel.

Now here’s the punch line: Among those in the school district considered “non-essential” – TEACHERS!

There are two main reasons for the budget deficit…

Folks, this is EXACTLY why there should be NO UNIONS for government employees.  How in the hell is it right that a single, UNELECTED “arbitrator” can stick Nevada’s taxpayers with a $25 million bill that we, the people, had absolutely no say in whatsoever.

And this is exactly why Education Savings Accounts (ESAs), which Gov. Sandoval single-handedly killed in the 2017 legislative session, are so critical to so many low- and middle-income Nevada families.