Just days after he testified against GOP campus carry legislation.

(Tony Dane) – A move that is clearly against the law. Indeed, *Nevada Revised Statutes (NRS) 205.320 forbids such threats and refers to such actions as “Extortion.” 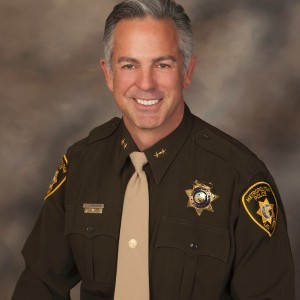 “Lombardo said arrest will be made in the political corruption probe involving hangers-on and some GOP lawmakers. Prob after session. 2/2”

Why did Sheriff Lombardo, who testified just days before against the legislation, now link the two topics in the same interview? Activist who feared speaking on the record believes Lombardo was issuing a threat against certain GOP lawmakers who support the GOP campus carry legislation of what will happen if they vote against his wishes.

To understand this threat, one must first know the events that led up to these statements.

Republicans won the Majority on November 4, 2015. Then minority leader Pat Hickey assumed he would be propelled to Speaker and he would name Assemblyman Paul Anderson as majority leader. Hickey said as much election night on stage at the GOP Election Party held at the Red Rock Casino.

Those plans were thwarted when conservative members sought to elect Ira Hansen as Speaker rather than Pat Hickey. Votes were whipped for Hansen and he did indeed become Speaker. The same elected Paul Anderson over John Hambrick as majority leader. That’s where things got dicey. Hansen with the consent of caucus members that elected him (majority of members) went on to name committee assignments and chairmen positions. Michele Fiore was assigned as Chairman of Taxation. Fiore is a Tax Pledge Signer. Brent Jones was named Vice Chair of Taxation, he is also a Tax Pledge Signer.

This new formation could not stand if the Governor was to achieve his up-coming tax proposal. The Governor had been working on his proposal and budget for more than a year and it would not stand a chance with the current people in place.

With a new election for Speaker needed the members began whipping votes for a new Speaker designate. Those who had previously voted for Hansen now turned to John Ellison. The other side lead by Paul Anderson supported Anderson for Speaker. The count pretty much came down to 12 to 12. Both sides needed the 13th vote to elect a new Speaker.

It is important to note that Chris Edwards did not support Ellison or Hambrick for Speaker but rather was all in for Paul Anderson.

Hambrick who had until now, been with the conservatives would only agree to vote with the 12 conservatives if they made him Speaker over Ellison. They did on the condition that all committee assignments remained as already assigned to which John Hambrick gave his word and agreed. Hambrick then betrayed those who elected him and joined the Anderson wing of the party within days of becoming Speaker. Using old media reports of Fiore’s tax issues to resurrect a full on media attack, that gave Hambrick good excuse to remove Fiore as Chairman of taxation and Majority Leader. Members voiced opposition to removing Fiore as Majority Leader unilaterally since she had been elected. Their opposition fell on deaf ears. John Hambrick again betrayed those who elected him and named Paul Anderson as majority leader. Hambrick also named Derek Armstrong, a freshman, as Chairman of the Taxation Committee.

During the 3 to 4 week time period that this all took place a political corruption investigation was initiated that involved Assemblyman Chris Edwards wearing a wire when meeting with other GOP lawmakers.

Several GOP members have stated on the record in live radio shows that Edwards repeatedly suggested his vote for Speaker following the November election, was up for sale. The offer had become common knowledge and people had begun calling Edwards out for trying to sell his vote, including meetings in his district to discuss  recall efforts.

Activist now believe Edwards, in an attempt to cover his own wrong doing and in conjunction with current leadership, filed a complaint with Las Vegas Metro Police Department, and under the direction of Sheriff Joe Lombardo, began wearing a wire. Edwards then initiated meetings with GOP lawmakers and activist in attempt to get them on tape offering Edwards cash or favors for his vote.

In January 2015, Sheriff Lombardo authorized a fully armed SWAT team to surround the home of activist Rob Lauer to collect his computer and cell phone and any papers concerning a possible ethics complaint Lauer may bring against Edwards for trying to sell his vote. Tony Dane, a political consultant residing in Virginia, also had his computers, cell phones and robo equipment taken by Metro under a warrant issued in VA in conjunction with Sheriff Joe Lombardo’s actions.  Lauer nor Dane know what Lombardo’s officers presented in their affidavit to obtain the warrants and the warrants remain sealed. Both Lauer and Dane have hired legal representation to get their personal property returned. Both want the warrants unsealed and believe the warrants were obtained unlawfully because there was no credible evidence to obtain the warrants in the first place. Activist believe this is nothing more than an effort to silence political dissent against the Governors tax proposal.

They also believe the Governor and/or the Governor’s people worked to remove Ira Hansen as the elected Speaker. Hansen, as Speaker had named Chairman Positions of the different committees that would make it difficult for the Governors tax proposal to pass out of committee, particularly the taxation committee.

The separation of powers was totally disregarded when Governor Sandoval himself put pressure on Hansen to resign.

At the same time, GOP members who did not vote for Hansen were meeting regularly in Assemblyman Paul Anderson’s office. Anderson was also trying to secure enough votes to become Speaker following Hansen’s resignation. Anderson did not have the votes to be elected Speaker. Edwards attended those meetings as did Assemblyman Derek Armstrong and it is believed Edwards was feeding Anderson the information obtained from Edwards wearing the wire. Money was flowing to Edwards and Armstrong but the most notable donations to the pair of lawmakers came from Governor Sandoval to the tune of 5000.00 each. These two Assemblymen were the only Assembly members to receive donations from the Governor and in addition Armstrong was named Chairman of taxation.  It is no secret Edwards was working with Anderson and had also met with John Hambrick in Hambrick’s home. No mention of Edwards wearing a wire in those meetings, it appears his spying was reserved to the 12 who did not support Anderson.

Some GOP lawmakers and activist want to know why the warrants are still sealed when apparently information is being fed to Chris Edwards as noted by his comments to the Las Vegas Sun:

Edwards: “There are multiple people involved. The police have been fantastic, keeping me in the loop. I have been working with them since day one. I absolutely think the just thing will be done.” Edwards, R-Mesquite, said the extortion case is getting stronger against the perpetrators but would not say who tried to extort him over his vote after he was sworn-in as an assemblyman. Hambrick added: “I have not been notified in any way, shape or form that I am connected to this.”

But Hambrick’s statement seems off to say the least. Once Hambrick was elected Speaker – would he have us to believe he was not talking to the Governor or Assemblyman Paul Anderson when deciding to unseat Fiore as Chairman of Taxation and remove her as Majority Leader? Hambrick ignored the votes of the caucus, removed elected Fiore and seated Anderson as Majority Leader and Armstrong as Chairman of Taxation. Who believes Anderson and Hambrick were not working together? These are the questions that remain unanswered: Where and who did Hambrick meet with to remove Fiore and replace her with Paul Anderson as leader? When and where did he did meet with Armstrong to talk about naming him chair of taxation and who else attended that meeting? Did Hambrick make the call to solicit that 5000.00 dollar donation from the Governor for Armstrong? Who made that call? Did Assemblyman Paul Anderson make the call? Who was involved in devising this plan? Was Armstrong made to agree the Governors tax proposal must come out of committee to get the nod as Chair?Who put Edwards up to wearing a wire when meeting with GOP members? How did Edwards get a 5000.00 donation from the Governor while he was wearing a wire? How did Metro get permission from Lombardo to send officers to Virginia? And since it involved elected officials did the Governor give permission for Lombardo to proceed? Was the Governor being informed to the contents of Edwards wiretapping?

The mainstream media has ignored these questions but they need to be answered.

Recall efforts are still being carried out, Robo calls are still being made. And now, are statements “threat of arrest” by Sheriff Lombardo yet another intimidation ploy to silence political dissent and affect the outcome of political agendas?  Is this the Sheriff way of letting GOP lawmakers know if they vote for the campus carry legislation arrest will follow in the Edwards wiregate probe?

* NRS 205.320 Threats. A person who, with the intent to extort or gain any money or other property or to compel or induce another to make, subscribe, execute, alter or destroy any valuable security or instrument or writing affecting or intended to affect any cause of action or defense, or any property, or to influence the action of any public officer, or to do or abet or procure any illegal or wrongful act, whether or not the purpose is accomplished, threatens directly or indirectly:

1. To accuse any person of a crime;

2. To injure a person or property;

3. To publish or connive at publishing any libel;

4. To expose or impute to any person any deformity or disgrace; or

5. To expose any secret,