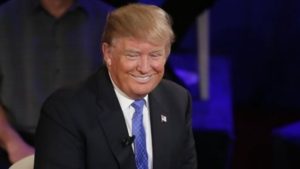 (Bill Saracino, California Political Review) – To do a brief full disclosure, I was a national director of the Super PAC which created the Draft Ben Carson for President movement and, after he officially announced his candidacy, the Super PAC (2016 Committee) supporting that candidacy. After Carson withdrew I wanted to support Marco Rubio, but he imploded shortly after Carson, so for about a nano-second I was the congressional district chairman for Ted Cruz in my Glendale, CA-based congressional district.

That means Donald Trump was my fourth choice for president. He is now my first choice, indeed, the only choice that makes any sense. He is the only choice that gives hope that America and her traditional freedoms will not be thrown down the rat hole represented by putting another Democrat in the Oval Office on January 20, 2017.

Since Trump clinched the nomination thousands of trees and millions of electrons have been sacrificed to document the nascent (for UCLA grads, that means “new”) “Never Trump” movement among Republicans. There are some well-meaning activists, supporters of one or more of the other 147 GOP candidates for president, among the Neverland folks.  Many newbies to the political process among them, their disappointment is palpable and understandable. They get a pass. What is not excusable is, for lack of a better definition, the “conservative establishment” types who are spearheading and cheerleading for the Never Trump, Neverland crusaders.

I know most of the Never Trump/Neverland folks. I’ve worked with some of them. A smaller group of them I consider friends. That said, with very few exceptions the Never Trump leadership (largely confined to the East Coast) consists of navel gazing, thumb sucking narcissists. Most of them have never run for office or been in a hands-on position in a winning political campaign. I wouldn’t trust them to win a municipal water board campaign in California.

But they are “very important people” and “deep thinkers” – just ask them. In fact, you don’t need to ask them, they’ll tell you… over and over again. They are mad as Hell that the Republican primary voters did not follow instructions. So to punish the GOP plebeians who disobeyed orders and nominated someone outside the acceptable Conservative Caste, these conservative “leaders” are willing to turn the country, and most importantly the Supreme Court, over to Hillary/Bernie/Joe, all of whom would govern as Obama’s third term.

As my dear old friend John Nolan used to say, “stupid, stupid, stupid. I am so tired of stupidity!” (Side note to personal and political friends, John Nolan was Pat’s father).

I am hardly blind to Donald Trump’s deficiencies as the ideal conservative or even ideal Republican. But neither am I blind to the fact that one – and only one – issue truly matters for the future of the country, and that is the future of the Supreme Court of the United States.

Like it or not, SCOTUS is where the action is in re: determining the future direction of American governance. For the past 40 years, from Roe v. Wade through Kelo (eminent domain) to gay “marriage” and Obamacare, the left has won its most significant victories in SCOTUS – victories it could never have won at the ballot box. Sadly but truly, SCOTUS has had and will continue to have much more influence on America than any majority in Congress.

The next president is likely to have at last two and perhaps four appointments to SCOTUS. Given the current 4–4 balance in SCOTUS, the next president will set the ideological balance for the next 20–30 years, and that ideological majority will form America’s politics, mores and future … until most of you reading this column are dead.

We cannot be sure what kind of appointees we’d get from President Trump, but we most certainly can be sure what we’d get from Hillary/Bernie/Joe – far left ideologues who would pave the way for America’s descent into a dark, extended nightmare of socialist tyranny.

My NeverTrump-Neverland friends rightfully point out that there’s no assurance that Trump’s appointees would be stellar conservative constitutionalists. They are right of course. SCOTUS appointments are notoriously fickle. Hence Ronald Reagan’s huge mistake in putting Sandra Day O’Connor  on the bench juxtaposed with George H.W. Bush’s enormous favor to America in adding Clarence Thomas to the Court. So who was the better conservative in that trade-off?

Here’s the exercise I want Trump deniers to do. Pick a number between one and one hundred, said number representing what you think are the odds that President Trump would put good judges on SCOTUS. Then pick a similar number for Hillary/Bernie/Joe. This is a trick question, as it really doesn’t matter what number you chose for Trump. His number is going to be bigger than the Democrats’ number, which is zero. That is game, set and match for me.

There are many other issues on this topic worthy of discussion, and I will do my best in future columns to do justice to both the pro and anti-Trump viewpoints. I will close with a quote from the always wise Dennis Prager, who recently wrote: “I just don’t understand how anyone who understands the threat the left and the Democrats pose to America will refuse to vote for the only person who can stop them.”

N&V StaffOctober 7, 2022
Read More
Scroll for more
Tap
Gaming, Unions, and Politicians Vs. Voters, Taxpayers, and Business
At This Rate, The State of Nevada Will Have Blown $112.5 Million For Zilch