NeverTrump – Doing Nothing In The Face Of Evil

NeverTrump – Doing Nothing In The Face Of Evil
N&V Staff

(Bill Saracino, California Political Review) It was Irish statesman – and one of the conservative movement’s philosophical godfathers –   Edmund Burke who said “all that is necessary for evil to triumph is for good men to do nothing.” Though written in the late 1700s, his thought is relevant today, most specifically in regards to the attitude of NeverTrump diehards to the many and obvious evils that would result from a Hillary Clinton presidency.

Now is as good a time as any to repeat that the few folks I know who still cannot bring themselves to vote for Trump are good people. I disagree vehemently with their conclusion, but don’t doubt the sincerity of their thoughts. The national leadership of NeverTrump, however, represents a horse of a different color – and in fact not the entire horse, just the hind quarters. These folks are not blind to the evils that lurk after next January 20 – but they can’t overcome their moral narcissism in order to do what is right for the country by defeating Hillary.

I have written before of the Stalinist nightmare that Hillary’s presidency would most certainly bring to the country. She would weaponize the federal judiciary with Ruth Bader Ginsburgs and the bureaucracy with Lois Lerners. These folks would then proceed with the persecution and prosecution of all things conservative – institutions, individuals and thought. 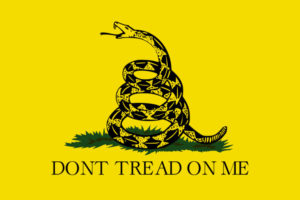 The Equal Employment Opportunity Commission issued an official ruling against a worker who had a Gadsen Flag – “Don’t Tread On Me” – hanging in his office, saying it was “prima facie” evidence of racial discrimination. He was ordered to remove the flag or face prosecution. The chairman of the EEOC recently stated that we needed to “purge” – his word – from our language the phrases “religious liberty,” “religious freedom” and “religious tolerance” because they were “synonymous with racial and sexual discrimination.”

The Democrats on the Federal Elections Commission have made no secret of their desire to “bring fairness” to talk radio and the internet, which in their definition means controlling content for Rush Limbaugh, Fox, Drudge, Breitbart and anyone deviating from the liberal party line.

A Hillary Clinton presidency would be staffed from top to bottom with empowered, radical leftists who have already shown their Stalinist roots. A full-scale pogrom of persecution against conservatives is absolutely certain. Also absolutely certain is that a judiciary full of activist ultra-leftists will give the green light to any and all search and destroy missions aimed at conservatives.

Add to this the events of the past 10 days or so when it has become obvious that the Clintons are corrupt to the core.  Hillary turned the State Department into a cash laundromat for the Clinton Foundation, while Bill was the front-man for the “pay-to-play” operation of folks seeking access and favors from Madam Secretary.

In the face of all this palpable evil the leadership of NeverTrump continues to put their own selfish, priggish, holier-than-thou attitudes above the interests of the country. Billy Kristol and Bow Tie Will proceed with their months long orgy of political Onanism. Will – who remember opposed Ronald Reagan when he ran for president because Reagan had “too many wrinkles in his neck” – opined on a Sunday talk show that Trump needed to “lose massively” in order to “free the GOP from talk radio.” In other words, free the GOP from opinions other than those of Will and his fellow effete, impudent snobs, to borrow a phrase from Spiro Agnew.

The reactions of Will, Billy, the Weakly Standard and the formerly relevant National Review are remarkably similar to the rage felt by the “old media” establishment 30 years ago at the dawn of the internet age and talk radio. The old media was panicked, realizing that their stranglehold on the flow of information, their positions as gatekeepers of what facts were and were not broadcast or printed for the general public was threatened.

So it is with the fossils of NeverTrump, the D.C. to New York cabal of self-appointed, ever-so-pious and pure guardians of “acceptable” conservative thought. Rank-and-file conservatives finally took a good look and realized that these emperors have no clothes. The conservative grass roots realized that instead of political and policy victories these “leaders” delivered hot air, pomposity and arrogance. The worker bees of the conservative movement rallied around Ben Carson, Ted Cruz, Marco Rubio and yes, Donald Trump. Because they realize what is at stake, the activists are working hard for Trump, realizing that voting for him is the only way to save the country and Constitution. Meanwhile the poseurs (for UCLA grads that means phonies) of NeverTrump fiddle while all that they supposedly hold dear is burning.

This is the 14th presidential election I’ve witnessed. Never before has the triumph of evil seemed so near at hand, nor so capable of defeat if good men and women would unite to do so, even if that means voting for a less-then-perfect candidate.

A win for Hillary will bring on a long, dark night of statist repression aimed squarely at all things conservative. When that happens, NeverTrumpers will rightfully be asked, “What did you do to prevent this horror?” NeverTrump’s honest answer will have to be “nothing” – and Edmund Burke’s prediction will tragically have come to fruition.