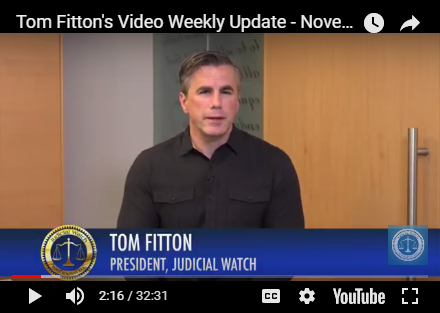 While there are now belated rumbles in Washington about a Department of Justice investigation of Hillary Clinton’s email practices, we continue to steadily discover for you and the American people the nature of the corruption going on behind the scenes at her State Department.

This week we released 109 pages of Hillary Clinton emails from her tenure as secretary of state. The documents include two email exchanges classified confidential and a 2011 exchange with Sid Blumenthal about “serious trouble for the Libyan rebels.”

The newly produced emails were part of 72,000 pages of documents the FBI recovered last year in its investigation into Clinton’s use of an unsecure, non-government email system. The records include emails Hillary Clinton attempted to delete or did not otherwise disclose. These emails are also available on the State Department’s website.

Two heavily redacted emails marked Classified Confidential included a November 2011 exchange under the Subject: “Egyptian MFA on Hamas-PLO talks,” and a June 28, 2011 email from Clinton to Abedin in which Clinton writes “I have now promised the Kuwaiti PM 3 times that I will deliver an address at the Oxford Islamic Center. Pls be sure that’s on the list for next Fall/next year.”

On March 9, 2011, Sid Blumenthal emailed Clinton about the situation in Libya, with the subject line “H: serious trouble for Libyan rebels. Sid” The email discusses urging leaders of the National Libyan Council (NLC) “to consider hiring private troops (mercenaries) to support, organize, and train the rebel forces in Libya.” Blumenthal adds: “A small number of private troops could turn the battle against Qaddafi’s forces, particularly if they are equipped with sophisticated anti-aircraft weapons.” Clinton asks former aide Huma Abedin to “print for me w/o any identifiers”.

The Washington Times reported Libyan officials were deeply concerned in 2011 that Clinton was responsible for weapons being funneled to NATO-backed rebels in Libya with ties to al Qaeda.

On October 6, 2009, Clinton’s then-Chief of Staff, Cheryl Mills emails “I am purposefully on gmail” to Abedin and Maggie Williams, former campaign manager for Clinton’s 2008 presidential campaign. [Emphasis added] Mills was responding to an October 4, 2009, email from Clinton, most of which was redacted.

On January 6, 2012, Clinton can be seen “expediting” a citizenship request so the requestor can get a government job in policy or law enforcement:

I am told by Citizenship and Immigration (CIS) caseworkers that it may be at least another 8 months before they get to me, making the total time more than a year (they advertise 6 months total turnaround time).

Would you consider helping me by reaching out to DHS Secretary Napolitano or CIS Director Alejandro Mayorkas who reports to her on my behalf? The ask is to simply consider moving up my applications for review ASAP. My application is complete, straight forward and I have nothing to hide.”

Clinton responds: “I’m copying Huma [Abedin] and asking her to see if we can help expedite this for you because we want you to be a citizen as soon as possible! I’ve got my fingers crossed.  Happy New Year–H.”

On August 4, 2009, Terrence Duffy, a donor to the Clinton Foundation and executive chairman of the derivatives giant CME Group, asks Clinton for her assistance in setting up meetings with Asian leaders.

I am planning a trip to Asia for October 3-10. While there, I will be traveling to Beijing, Tokyo, Hong Kong and Singapore and I was wondering if there is any way you could help set up a meeting or 2 with some elected officials in any of those regions. Once again, you’re doing an amazing job and all of America is very fortunate to have you as our Secretary of State.”

Clinton responds: “Terry–I’m emailing from Capetown [sic], one of my favorite cities in the world. I’m copying your email to Huma so she can follow up w you regarding your Asia trip. Hope you’re well. All the best, H.”

We previously reported that Duffy had also asked Clinton in September to arrange “government appointments” for his October trip. Duffy gave $4,600 to Hillary’s 2008 presidential campaign; in November 2013 CME Group paid Hillary Clinton a $225,000 speaking fee and has donated between $5,001 and 10,000 to the Clinton Foundation.

All emails sent or received by former Secretary of State Hillary Rodham Clinton in her official capacity as secretary of State, as well as all emails by other State Department employees to Secretary Clinton regarding her non-“state.gov” email address.
Under the current pace of production, the Clinton emails and other records won’t fully be available for possible release until at least 2020.

These new Clinton emails add to the pile of evidence demonstrating the need for a serious criminal investigation of Hillary Clinton and her associates. It is shameful that this State Department is releasing these Clinton emails so slowly.

I trust President Trump agrees the State Department and Justice Department need to follow the rule of law and stop covering for Hillary Clinton and the Obama administration.

For some time, through our Election Integrity Project, we have been keeping an eye on states that can’t seem to keep their voter registration rolls cleaned as federal law requires.  And, when the situation is egregious enough, we go to court to ensure the law is followed.

This week we sued the Commonwealth of Kentucky over its failure to take reasonable steps to maintain accurate voter registration lists. Our lawsuit argues that 48 Kentucky counties have more registered voters than citizens over the age of 18. We filed the suit in the United States District Court for the Eastern District of Kentucky, Central Division (Judicial Watch, Inc. v. Alison Lundergan Grimes et al. (No. 3:17-cv-00094)).

Kentucky was one of 12 states to which we sent notice-of-violation letters this year threatening to sue because they have counties in which the number of registered voters exceeds the number of citizens of voting age. Both the National Voter Registration Act (NVRA) and the Help America Vote Act require states to take reasonable steps to maintain accurate voting rolls.

Whenever a jurisdiction has more voter registrations than individuals old enough to register – in other words, a registration rate exceeding 100% of adult residents – it is a strong indication, recognized by federal courts, that the jurisdiction is not taking the steps required by law to remove the registrations of ineligible registrants.

We also note that Kentucky is one of only three states in the country where the statewide active registration rate is greater than 100% of the age-eligible citizen population.

We cite several other deficiencies in Kentucky’s handling of voter registration and related issues. Kentucky is required by law to disclose to the federal Election Assistance Commission the number of inactive registrations it carries on its voter rolls. It failed to do so.

Kentucky is also required to report the number of address confirmation letters it sent to citizens who were thought to have moved out of state. It failed to release this information as well.

Kentucky is also required by federal law to keep registration-related records and to make them publicly available on request. We made such a request, and Kentucky initially promised to disclose these records. But it broke this promise and, to date, has failed to make records available.

We point out that Kentucky’s inflated voter rolls indicate that it is not complying with federal laws requiring it to cancel the registrations of citizens who have died or moved elsewhere. This conclusion is bolstered by Kentucky’s failure to divulge registration-related records it is required to disclose by federal law. In our lawsuit, we ask the court to declare Kentucky in violation of Section 8(a)(4) of the NVRA; to require it to implement a program to remove ineligible registrants; and to compel it to turn over relevant records and information.

Kentucky has perhaps the dirtiest election rolls in the country. Federal law requires states to take reasonable steps to clean up their voting rolls – and clearly Kentucky hasn’t done that. Dirty voting rolls can mean dirty elections. This lawsuit aims to ensure that citizens can have more confidence that elections in Kentucky won’t be subject to fraud.  (JW previously filed successful lawsuits under the NVRA against Ohio and Indiana that resulted in those states taking several actions to clean up their voting rolls.)

We have a top-notch team on this case.  Judicial Watch Senior Attorney and Director of its Election Integrity Project. Robert Popper recently provided testimony to the Presidential Advisory Commission on Election Integrity concerning the NVRA. Popper was formerly deputy chief of the Voting Section of the Civil Rights Division of the Justice Department.

The Kentucky action isn’t our only direct lawsuit, as we are also in court now against the State of Maryland and Montgomery County over their failure to release documents in violation of the NVRA.

Watch this space for updates on these lawsuits to preserve our elections from fraud and abuse.

We Sue DOJ for Communications On “Russian Lawyer” – Was She Working with Clinton/Obama Operation?

To what extent was the Obama administration involved in the effort to take down President Trump? We hope to uncover some of the truth.

We filed suit after the Justice Department failed to respond to an August 4, 2017, FOIA request seeking:

Any and all records of communications sent to or from officials in the Offices of the Attorney General and Deputy Attorney General regarding an immigration parole issued to Russian national Natalia Veselnitskaya between January 1, 2015 and December 31, 2016.

Fox News recently reported on a meeting between Fusion GPS and Veselnitskaya:

The co-founder of Fusion GPS, the firm behind the unverified Trump dossier, met with [Veselnitskaya] before and after a key meeting she had last year with Trump’s son, Fox News has learned. The contacts shed new light on how closely tied the firm was to Russian interests, at a time when it was financing research to discredit then-candidate Donald Trump.

The opposition research firm has faced renewed scrutiny after litigation revealed that the DNC and Hillary Clinton’s campaign paid for that research. Congressional Republicans have since questioned whether that politically financed research contributed to the FBI’s investigation of Russian collusion with the Trump campaign – making Fusion’s 2016 contacts with Russian interests all the more relevant.

The “Russian lawyer” who finagled a meeting with Donald Trump, Jr., evidently wasn’t supposed to be in the country. We want to know what the Obama Justice Department knew and when it knew about what Ms. Veselnitskaya was up to.

This lawsuit is one of nearly two dozen Judicial Watch filed to expose the apparent corruption behind the effort to destroy President Trump during the campaign last year – an effort which continues to this day.