(Brian Baluta, Dr. Joe Heck) Today, the Dr. Joe Heck For U.S. Senate campaign released a new video on www.CorruptCatherine.com exposing Catherine Cortez Masto’s past as Harry Reid’s personal political prosecutor. While she was Nevada’s attorney general, Cortez Masto attempted a high profile prosecution of Nevada’s Lieutenant Governor Brian Krolicki, a blatantly political effort to derail Reid’s likely challenger in the 2010 Senate race. Cortez Masto’s case fell apart, found by a judge to have little basis in reality, but the damage was done – and Cortez Masto was rewarded by her political mentor when he handpicked her to carry on his legacy of partisanship immediately after Reid announced his retirement.

“In 2008, Cortez Masto indicted then-Republican Lieutenant Gov. Brian Krolicki for mishandling state funds. (Krolicki wasn’t accused of misspending or stealing any money, however.) A judge later tossed the indictment as unconstitutionally vague. But the damage to Krolicki’s political career was done and he passed on a 2010 challenge to U.S. Sen. Harry Reid, who’s now an enthusiastic Cortez Masto backer.” (Steve Sebelius, Las Vegas Review-Journal, August 25, 2016)
“…her more controversial decisions – indicting a GOP treasurer, Brian Krolicki, on charges that later disappeared, and wrist-slapping a Democratic assemblyman, Morse Arberry, for putting campaign funds into his pocket – are legitimate fodder. Some Republicans will never forget the Krolicki indictment, believing Cortez Masto did it to curry favor with Reid, who knew the treasurer wanted to challenge him in 2010. Even though the indictment fell apart, it conveniently kept Krolicki from running, keeping alive the mythical (or real) powers of Reid to influence everything and, perhaps, changing the angle of Nevada history.” (Jon Ralston, Reno Gazette-Journal, August 30, 2016) 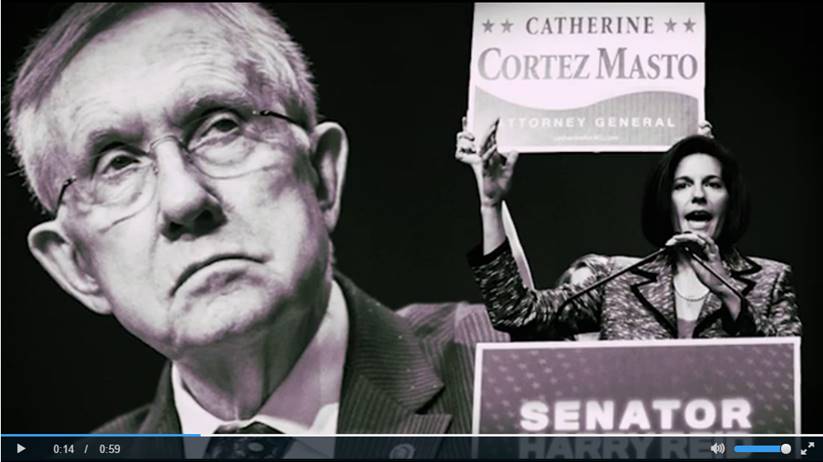 SCRIPT:
Partisanship and lies, that’s the Harry Reid legacy. Now after a career of special interests, lies, and radical liberalism, Reid is looking to pass the baton, and who better than his personal political prosecutor, Catherine Cortez Masto? She led a politically charged prosecution to protect Reid and keep him in office, slandering and falsely accusing his likely opponent. That’s the kind of Washington backroom deal that requires a little kickback later. No wonder Reid picked Catherine Cortez Masto to continue his poisonous legacy of deceit in the U.S. Senate. Fortunately, Nevadans get the final say, not these career politicians. It’s time we put an end to the political games they use to preserve their power. This Fall, let’s send Reid and Corrupt Catherine Cortez Masto packing. It’s time to stand up for Nevada.