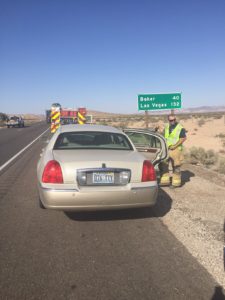 OK, so the bad news is this is where I spent happy hour Friday afternoon…

The good news is, I wasn’t involved in the accident.  It happened in front of me and I just played the role of Good Samaritan.

I helped push the car off the highway to unblock rush-hour traffic on its way to Vegas for the weekend and let the two young 20-something girls from San Diego who crashed into the back of a pick-up truck sit in my air-conditioned car (it was over 100 degrees out) until paramedics and Highway Patrol arrived.

The better news is that no one was seriously injured – although one of the girls was taken to the Barstow Community Hospital to have a shoulder injury looked at (probably from the airbag that went off).

After about an hour on the side of the road, I proceeded to Las Vegas and picked up my 16-year-old daughter from her friend’s house on the way.

Kristen, for her part, had picked up her learner’s permit the day before. 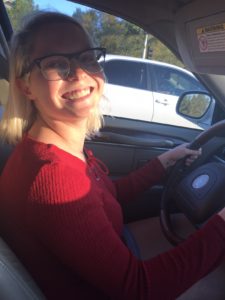 Unfazed by the twisted metal carnage I left on I-15, I tossed Kristen the car keys and off we went to a celebratory dinner.

Now I know why professionals teach driver’s ed.  You’ve GOT to have a brave heart.

But everything went fine and no animals or humans were killed, maimed or injured.  Thus another milestone in a parent’s life has been reached and breached.

Happy for Kristen; sad for Dad.

Oh, and I let the driver of the car use my cell to call her mom since her phone wasn’t getting a signal.  As the girl was pretty shaken up, she asked me to talk to her mom and give her all the information needed to call the insurance company, make arrangements to have the vehicle towed, and come get the kids.

And her mom didn’t care that I was white either – though to be fair she might not have known I was a “cracker” since we weren’t using Facetime.  She was just very appreciative that I was there and helped her daughter in a clearly scary situation.

Is that the craziest thing or what? 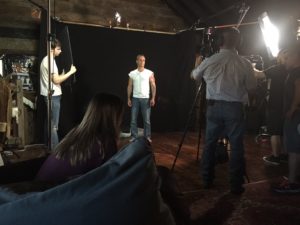 So no one guessed who was featured in the photo (right) I teased you with Friday or what we were doing and where.  One person came close, but no cigar.

The tattooed/bare-footed candidate’s name is Paul Nehlen.  He’s running in an August 9 GOP primary against the #1 establishment Republican in Congress.

And he’s definitely not your typical Republican candidate.

Click here to see his first campaign commercial and where/how the yellow dump truck I mentioned on Friday fits into the picture.  This one’s gonna be fun!

So there’s a lame, full-page political ad in today’s Las Vegas Review-Journal paid for by something called the “No Solar Tax Pac” which reads (yes, foolishly in all caps)…

I’m guessing a full-page ad like this in the Sunday edition of Nevada’s largest newspaper probably would run around $15,000-20,000.  As such, you’d think somebody would, you know, proof-read it first.  And apparently you’d be wrong.

I wonder what PR/advertising firm pulled this boner?