NSEA’s current legislative priorities are:
A. Resources to attract and retain the best educators to Nevada’s public schools.

D. Provide the necessary sources of funding for the support of Nevada’s public schools.

Noticeably missing from that list are little things like increasing student achievement and boosting graduation rates. The fifth and final NSEA priority is actually a good one — doing a performance audit on school district spending — but it’s striking that the success of Nevada’s children isn’t a priority for the NSEA.

What’s amazing about this isn’t the content — it’s been apparent for decades that unions claiming to represent teachers are more interested in increasing spending than in increasing student achievement. What’s stunning is that the NSEA has made this information publicly available. On its website, the Nevada State Education Association is encouraging its members to fill out a “2012 Legislative Survey.” When you click on the survey link you go to this page.

The very first thing listed is the above priority list.

And the NSEA’s has had remarkable success in meeting its priority. In the last 50 years, Nevada has nearly tripled inflation-adjusted, per-pupil spending. Student achievement though has been stagnant. 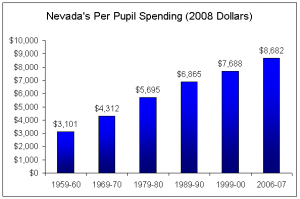 It’s not just in Nevada that unions have succeeded in getting politicians to spend more while getting stagnant or worse results. Nationally, inflation-adjusted, per-pupil education spending has increased by over 130 percent in the last 40 years. Results? Not so much. 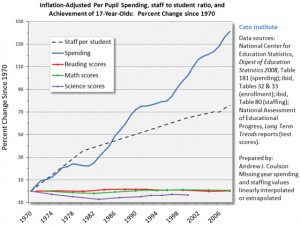 As a private organization, the NSEA can set whatever priorities it wants, but everyone else needs to know the truth about it.
Increasing spending doesn’t increase student achievement, and yet, the NSEA’s priorities are money, money, money and money. And that should significantly impact how everyone — parents, grandparents, the children in your neighborhood, the media and especially lawmakers — views what the NSEA says and what it does.
The NSEA is interested in more education spending, not in increasing student achievement.

Take today’s poll: Who, if anyone, should drop out of the Republican Presidential race?