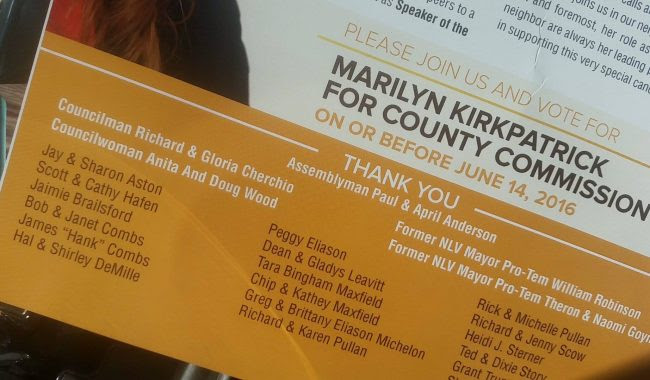 (Dimarkco Chandler, Guardian Liberty Voice) – The Nevada GOP divide continues to grow this election cycle. The most notable and perhaps most bizarre endorsement is that of Republican Assemblyman Paul Anderson, who represents Assembly District 13 and is endorsing a Democrat.

Rank and file Republicans are having a hard time accepting yet another betrayal by the GOP Majority Leader. Anderson also teamed with the Democrats to pass the largest tax hike in Nevada history in 2015. Along with his support for allowing gender-neutral bathrooms in the public schools and his vote against a favorable second amendment bill, Anderson faces a tough re-election, especially in an anti-establishment election year.

Kirkpatrick, who had been the Democrat Speaker of the Nevada Assembly, became the Minority Leader when Republicans won the Majority in 2014 but termed out after the 2015 legislative session. She subsequently was appointed to the Clark County Commission when Commissioner Tom Collins resigned leaving a vacancy.

This election, Kirkpatrick will be on the ballot in a bid to retain the appointed seat.

Rumors are circling that in return for Paul Anderson’s endorsement and support, Kirkpatrick would keep any Democrats from running in Assembly District 13. The rumblings may have merit since no Democrat filed to run. Three Republicans are on the ballot in the Primary, Leonard Foster, who has run and lost several times, Steve Sanson, a U.S. Retired Marine, and Paul Anderson the incumbent. Whoever wins the primary will advance and be the winner in the general election with no Democrat challenger.

Interesting is also the fact that as Majority Leader, Paul Anderson worked to change the law regarding the formula to win an election when only one major party candidate filed to run in a district. The old law required when only candidates from one major party filed to run in the primary, the top two vote-getters would go on to run against each other in the general election. With the law change in 2015, that no longer applies, and the winner of the primary is the automatic winner of the general election.

Anderson, who has consistently voted against the Republican platform, was censured by the Clark County Republican Party for his 2015 voting record. The move marks the first time the GOP members publicly chastised and disowned a sitting Assemblyman.

Anderson may also lose votes from a more conservative Mormon/Christian base for his vote on allowing sharing of bathrooms with males/females in public schools. Another concern for parents and students is that it’s not just the bathrooms, but also includes the showers.

According to Channel 2, when the Department of Education sent out examples of policies, they used this part of Washoe’s regulation saying “students have the right to be addressed by the names and pronouns that correspond to their gender identity.”

Another concern for the conservative base is Paul Anderson’s lack of support for AB 405 Parental Notification:

The bill would require an abortionists to notify one parent no less than 48 hours before performing an abortion on a minor.  Currently, a doctor can perform on a minor child without notifying the child’s parents or obtaining consent.  AB 405 was intended to require parental notification.

Assemblyman Ira Hansen (R) worked tirelessly and relentlessly to assist the pro-life/parental rights advocates to  get the Bill introduced. Anderson, as Majority Leader, requested the  Committee chair to not hold a hearing on AB 405 making it impossible for a floor vote in the Assembly.  Simply put, the Republican leadership, led by Assemblyman Anderson, did everything possible to ensure the Bill failed.

As the Majority Leader of the GOP in the Nevada Assembly, Paul Anderson has become a liability for Republicans who are working hard to defeat the liberal-leaning official who they say, not only votes like a Democrat but openly supports them. Robo calls by a slew of sitting assembly members are going into District 13 encouraging voters to reject Paul Anderson and to vote for challenger Steve Sanson.

In addition, Anderson is under investigation by the Nevada Secretary of State for not disclosing over $41K in payments he made to two credit card debts using campaign funds. Another ethics complaint has been filed by Assemblyman John Moore claiming Anderson slipped him some cash on the side but failed to report the amount.