(Rick Manning, NetRightDaily.com) – The Obama Administration revealed one more of a string of regulations that have a practical impact of making the problem they claim to want to solve worse. 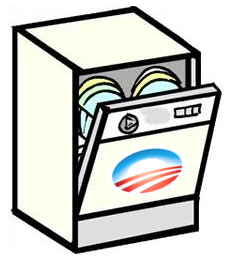 This time it is a Department of Energy regulation forcing new dishwashers to only use 3.1 gallons of water to wash a load of dishes.

What could go wrong?

Nothing so long as homeowners don’t mind grunge baked onto their dishes due to the failure to have sufficient water to clean off the food. No matter how much Cascade and JetDry you put into the system, not enough water means disgusting baked on egg, and other delights.

The purported reason for the water limitations is to cut those dreaded greenhouse emissions to comply with Obama’s on-going global warming jihad. In Obama’s Ivory Tower world, it is inconceivable that a dishwasher that doesn’t actually get dishes clean might cause people to take alternative action. The most likely of which is to use much more water by hand washing every dish before it goes into the dishwasher and effectively only use the appliance for killing bacteria through the high heat drying process. Or, perhaps people could go full Madge, and only hand wash dishes rendering the modern appliance and convenience useless.

Apparently, regulators at the Energy Department don’t wash their own dishes, so they are unaware of what a real person would do when their dishes come out of the dishwasher disgusting. But this is just the latest of many bafflingly out of touch decisions made by environmental regulators.

The New York Times reported that in 2012, oil refiners were forced to pay about $6.8 million in fines to the U.S. government due to their failure to mix a government decreed biofuel into their gasoline and diesel.

The only problem was that the government mandated biofuel did not actually exist outside of the laboratory. That’s right, the government mandated use of a product that wasn’t in production and still was in the laboratory testing phase, and turned a deaf ear toward those who complained, instead fining companies for failing to use a non-existent product. Eventually, the federal courts disallowed the fines, but left the mandate of a gradual shift to using additional biofuel in gasoline, leaving refiners uncertain about the availability on a year to year basis.

And this is not the only biofuel problem where the federal government pointy heads fail to understand how products like ethanol impact both automobile engines and the overall environment.

For years, the government has attempted to jam gasoline that contains 15 percent ethanol into the marketplace disregarding the damage that this level of ethanol does to the automobile engines themselves.

The perverse effect of ethanol is that according to the Department of Energy it reduces gas mileage by three to four percent, while the higher concentration of ethanol in E-15 reduces it by five percent. This government mandated gas mileage reduction occurs at the same time that the federal government is demanding dramatic increases in fuel efficiency standards.

In practical terms if a vehicle would normally get 400 miles on a 15 gallon tank of 100 percent gasoline, E-10 reduces this amount to between 388 and 384 miles, just under a full mile per gallon less than straight gasoline.

Yet, in spite of overwhelming evidence that corn ethanol is bad for both vehicles and for the environment, the mandates persist due to the apparent extraction of the common sense gene from anyone who works in the Obama Administration.

So, don’t be surprised when Obama refuses to relent on its crazy dishwasher rules that render the appliance obsolete while wasting water. After all, nothing can get in the way of their global warming quest, not even harming the environment along the way.

This column was originally published in NetRightDaily.com, is a project of Americans for Limited Government. The project, launched in August of 2008, offers a liberty-minded thought on the federal government as well as the threats that exist to individual liberty at all levels of government.