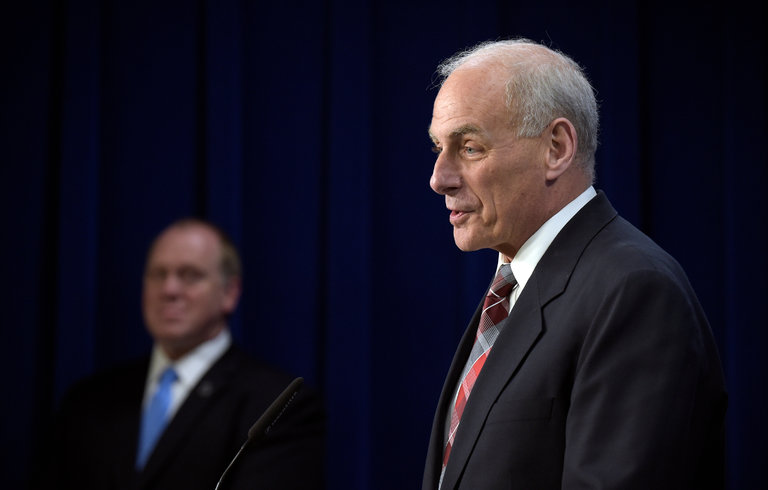 At right, John F. Kelly, the head of Homeland Security, with Tom Homan, the acting director Immigration and Customs Enforcement, at a news conference in Washington on Wednesday. (Courtesy: Susan Walsh/AP)

(Ron Nixon & Liz Robbins, The New York Times) – The Department of Homeland Security on Wednesday announced the creation of an office to help families that have been the victims of crimes committed by undocumented immigrants, part of an effort by President Trump to aggressively crack down on illegal immigration.

Critics of Mr. Trump’s approach say it unfairly takes aim at a population that is less likely to commit crimes than American citizens.

The office, called Victims of Immigration Crime Engagement, or Voice, will be housed within Immigration and Customs Enforcement, the agency responsible for deportations.

John F. Kelly, the secretary of Homeland Security, said the office would offer a voice for victims.

“All crime is terrible, but these victims are unique — and too often ignored,” he said. “These are casualties of crimes that should never have taken place because the people who victimized them oftentimes should not have been in the country in the first place.”

N&V StaffMarch 11, 2022
Read More
Scroll for more
Tap
Why I Won’t Let Go of the Las Vegas Trash Contract Fiasco
Google “Stuck on Stupid” and Here’s What You Might Soon Find…