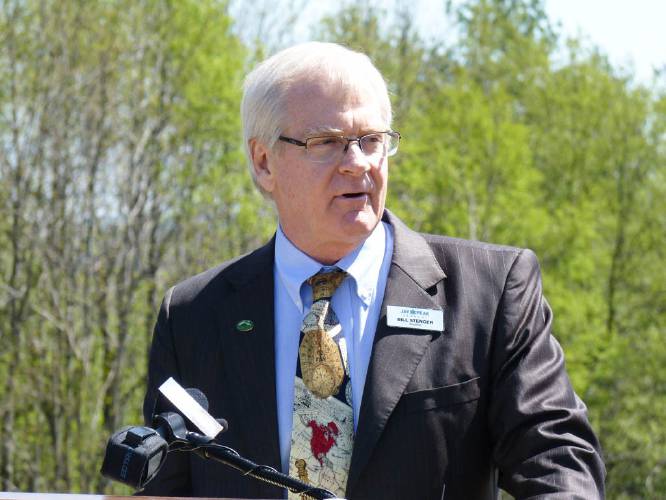 Jay Peak’s Bill Stenger speaks at a groundbreaking ceremony in 2015 for a proposed AnC Bio facility in Newport. The project never happened, and Stenger was indicted on multiple charges. Photo by Anne Galloway/VTDigger

(Alan J. Keays | VTDigger) – Federal prosecutors are asking a federal judge to lock up Bill Stenger for five years for his role in a failed project to build a massive biomedical research facility in Newport that never got off the ground. Regulators have called it “nearly a complete fraud.”

That prison term is the maximum allowed under a plea agreement prosecutors reached with Stenger.

The recommendation from prosecutors is included in a sentencing memorandum filed late Monday afternoon in federal court in Burlington in the criminal case against the former Jay Peak Resort president who was once named citizen of the year by the Vermont Chamber of Commerce.

“All Vermonters should know that engaging in a massive fraud like this one will come at a heavy price,” Assistant U.S. Attorney Paul Van de Graaf, a prosecutor in the case, wrote in the filing.

“Many eyes are cast on the sentencing here,” he added. “The Court should send a loud and clear message that this type of fraud will not be tolerated.”

The prosecutor also wrote that Stenger’s conduct warranted a prison term of more than 10 years, though the maximum allowed under the plea deal is five years.

“Considering all the relevant circumstances,” Van de Graaf wrote, “a five-year jail sentence is sufficient but not greater than necessary.”

In addition to the five-year prison term, prosecutors are also calling on the judge to require Stenger to pay $1.66 million in restitution.

Stenger pleaded guilty Aug. 13 to a federal criminal charge of submitting false information to the government about the biomedical research project, known as AnC Bio Vermont.

As part of a plea agreement, prosecutors were allowed to seek a sentence of up to five years in prison for Stenger. His attorneys are permitted to ask for any lesser sentence.

His attorneys have yet to file their recommendation to the court ahead of Stenger’s sentencing hearing, which is scheduled for later this month. Brooks McArthur, an attorney for Stenger, has previously said he would request a sentence for his client that includes no time behind bars.

Stenger, a Newport, Vt., resident, has been under criminal indictment since May 2019, stemming from the project to construct a $110 million biomedical research facility in Newport.

Despite raising over $80 million from more than 160 foreign investors seeking permanent U.S. residency through their investments, little work was done in making the project a reality.

The investors put money into the project through the federal EB-5 visa program, which allows them to receive green cards for investments of at least $500,000 into a qualified project. If that project creates the required number of U.S. jobs, that investor then becomes eligible for permanent U.S. residency.

Prosecutors agreed as part of the plea deal with Stenger to dismiss the remaining charges against him, including several other false document and fraud counts.

The indictment against Stenger also named his partners in the business venture, including Ariel Quiros, Jay Peak’s former owner, and Bill Kelly, a key adviser to Quiros.

Both Quiros and Kelly have also reached plea deals with federal prosecutors. Quiros is facing a little more than eight years in prison, while Kelly is facing up to three years. Their attorneys will be allowed to argue for any lesser prison terms during their sentencing hearings later this spring.