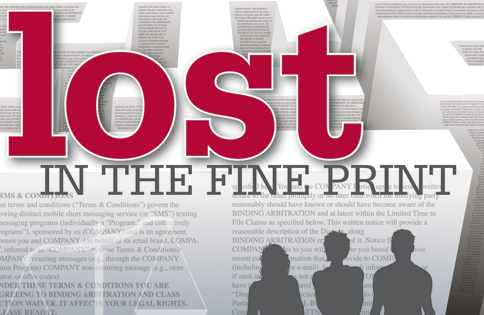 First, Wells Fargo reported that the number of fraudulent accounts opened for unsuspecting customers had reached 3.5 million – a mind-boggling 67% higher than originally thought. Then credit-reporting agency Equifax admitted that the names, Social Security numbers, birth dates, addresses and, in some instances, driver’s license numbers of 143 million Americans had been exposed in a security breach.

But it gets worse. Although Equifax later backtracked under pressure, both financial behemoths sought to duck responsibility behind a favorite legal shield of the industry’s: so-called “forced arbitration” provisions buried in the fine print of financial agreements signed by millions of consumers for everything from credit cards to payday loans to, yes, bank accounts.

It’s no wonder that overwhelming majorities of citizens, even Republicans and conservatives, polled across four states favor retaining a Consumer Financial Protection Bureau (CFPB) regulation protecting consumers’ legal rights against financial institutions — a rule in danger of being reversed by Congress.

Forced arbitration clauses require complaints against big banks and other financial players to be heard before a private adjudicator chosen by the firm — without a jury or many legal protections taken for granted in a court of law. But the CFPB rule preserves customers’ rights to join in class actions to fight financial institutions’ wrongdoing regardless of these clauses — critical because the ability to band together equalizes the scales of justice in cases that might be too small, yet too expensive, for citizens to pursue on their own.

That’s why more than 60% of registered voters across each of four states — Alaska, Louisiana, Maine and Ohio — polled in a survey commissioned by the American Future Fund (AFF) favored keeping the CFPB rule. And, in fact, nearly as large were the majorities of Republicans, and even those who label themselves “somewhat” or “very” conservative, who felt the same way.

The bad news is that the Republican-majority U.S. House of Representatives has already passed a “resolution of disapproval” aimed at overturning the regulation under the Congressional Review Act — and the GOP-run U.S. Senate will vote this month on whether it should do the same.

Unfortunately, Republican members of Congress all too often raise funds from — and therefore readily lend their ears to — the big banks’ Washington lobbyists. But ordinary voters across the political spectrum, including grassroots GOPers, recognize that preserving Americans’ day in court in the face of systematic abuses by big banks is not only the right thing to do, it’s the conservative thing to do.

The Founding Fathers were so concerned about ensuring equal access to justice for all citizens, not just the rich and powerful, that they embedded the principle in the Constitution in the form of the Seventh Amendment right to a jury trial. Not to mention that exempting class-action lawsuits from forced arbitration rules is actually a small-government approach, allowing groups of affected consumers to target real lawbreakers – and thereby eliminate the need for other, truly burdensome industrywide government regulations and compliance costs.

Not surprisingly, constitutional conservatives like Let Freedom Ring’s Colin Hanna decry how “arbitration hearings, in rendering consumers virtually defenseless, seem indeed to be the 21st century version of Star Chambers.” And Citizen Outreach President Chuck Muth has joined him and others in arguing that if “ginormous corporations” are “infringing upon the constitutional rights of Americans, then a conservative case can be made that it’s proper for the government to step in and protect our individual rights.”

Believe me, the CFPB is not my favorite agency. The bureau and its leadership are too unaccountable and often go too far in imposing costly rules that actually hurt consumers.

But in this instance the agency’s rule is the best vehicle to put power back into the hands of the people to call bad financial actors like Wells Fargo and Equifax to account. Voters of all political stripes, from coast to coast, recognize that reality — and Republican senators from the Last Frontier and the Pelican, Pine Tree and Buckeye States would do well to acknowledge it as well.

Ryan is founder of the American Future Fund, a national issues-advocacy group providing Americans a voice to support conservative and free market ideals.  This column was originally published in Investors Business Daily on September 25, 2017.