(Chuck Muth) – Assemblyman Greg Hafen (R-District 36) isn’t the worst Republican in the Nevada Legislature.  However, he represents one of the reddest of red districts and is nowhere near as good as that district deserves.

His voting record isn’t as bad as RINO Assembly critters Tom Roberts and Jill Tolles, but when it comes to voting conservative, he’s no Annie Black or Andy Matthews either.

But the problem with Hafen goes much deeper than just his “yeah” and “nay” votes on bills.

In a district with such a huge GOP majority, he should be a boat rocker, as well.  He should be standing up and aggressively representing his constituents as an OPPOSITION leader, not a wishy-washy minority legislator.

Instead, in his two legislative sessions, Hafen’s been a wall flower.  A potted plant.

District 36 Republicans deserve someone in Carson City who will “take point” and lead from the tip of the spear, not a REMF (non-military folks can Google the term) who sits in the back and watches the troops march by.

During the disastrous 2021 legislative session, Hafen was nowhere to be seen or heard on critical GOP issues, such as terminating Gov. Steven von Sisolak’s “emergency” CHINA-19 powers.

Or limiting the abuse of such authoritarian powers in the future.

Or opening the Legislature’s building to citizens.

Or opposing the Democrats’ requirement to produce a vaccine passport to enter the Assembly chamber.

Hafen was similarly AWOL on a host of other critical issues to Republicans – especially election integrity protection.  He just went along to get along.

In other words, he’s Grade-A primary bait.  There’s absolutely no reason for District 36 Republicans to be saddled with such a wet noodle.  Here’s why…

Republicans in this district could easily nominate a far more active, aggressive and philosophically conservative candidate in next year’s GOP primary and still hold this overwhelmingly Republican seat against ANY Democrat in the general election.

In the early days of the Sisolak Shutdown, Hafen was busy posting selfies of himself on social media tooling around the Nevada desert in his off-road four-wheeler and having the time of his life. 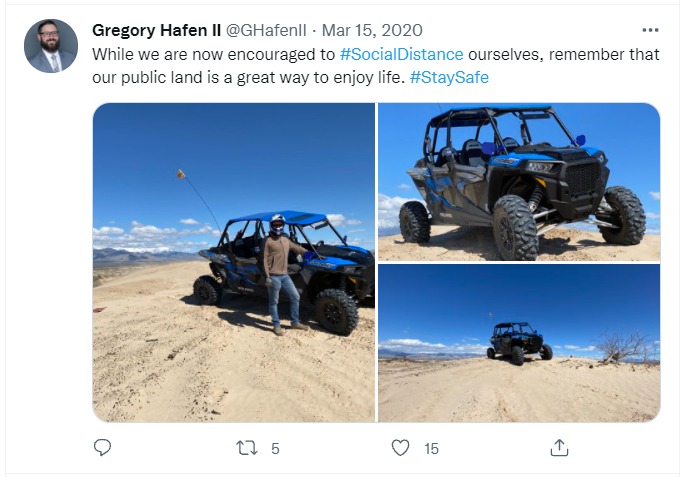 Meanwhile, Melissa was actively recruiting opponents to Sisolak’s dictatorial orders, especially his mask mandates.  She co-founded the No Mask Nevada PAC and organized various protests and demonstrations all around the state.

To be clear, the No Mask Nevada PAC doesn’t oppose Nevadans wearing masks.  It opposes the governor REQUIRING, by constitutionally-questionable executive orders, that Nevadans wear an “obedience mask,” especially without legislative approval.

That’s as American as apple pie.

And you’d think an elected official like Assemblyman Hafen – who represents the town of Pahrump, which has been designated as the “most patriotic community in Nevada” – would have joined the effort and been a key leader in the fight.

You’d have thought wrong.  He’s been AWOL.  An invisible man.  The cat’s had his tongue.

As such, Melissa is seriously considering challenging him in the 2022 GOP primary – which has the “accidental assemblyman” (he was originally appointed to the seat after Assemblyman Dennis Hof passed away) scared down to his skivvies and breaking out his Catholic rosary beads.

In addition to her active involvement in No Mask Nevada, Melissa owns an Italian restaurant in Pahrump which got hammered by Sisolak’s emergency shutdown orders.  She was also a field representative for the National Federation of Independent Business and served as the Executive Director of the Pahrump Valley Chamber of Commerce.

Greg’s business experience, on the other hand, consists of being hired to work in the family store – a utility company – right out of college before he “climbed his way to general manager.”

His words, not mine.  “Climbed” is hardly the word I’d use to describe being handed something on a silver platter – like the Assembly District 36 seat after Hof’s death.  Or all manner of other government boards and commissions he’s been appointed to thanks to the family name.

Hafen, the fortunate son, also boasts of being a “fifth generation Nevadan.”

Melissa, on the other hand, is a Nevadan by choice, not by birth.

Hafen, prior to his Assembly appointment, was rarely, if ever, seen at a Republican event or meeting.  Not much has changed since then – unless a cocktail reception is involved.

Melissa, on the other hand, has been an active member of the Nye County Republican Central Committee and the Pahrump Valley Republican Women since 2017.  She was elected 1st Vice President of the PVRW in January 2020 and re-elected in January 2021.

Meanwhile, the endorsements Hafen boasts of on his campaign re-election website is a Who’s Who of RINOs (Republicans in Name Only) in Nevada, including:

What a rogue’s gallery!

And, by the way, Hafen has consistently refused to sign the Taxpayer Protection Pledge promising us he’ll “oppose and vote against any and all efforts to increase taxes.”

My guess is Melissa will proudly sign it, without reservation, on the day she announces if she decides to run.

Which is why Hafen is desperately trying to head off a Blundo challenge.

If fact, in a self-serving blog post a few days ago, Hafen begged GOP voters to “to remember the Reagan Rule not to attack fellow Republicans.”

And that, my friends, is a load of crap.  That is NOT what Reagan said.

The Reagan Doctrine calls on Republicans to refrain from PERSONAL attacks – such as attacking someone for their divorce – not political differences.  Indeed, President Ronald Reagan hit then-President Gerald Ford pretty darned hard on policy differences in their GOP primary in 1976.

RINOs always try to use the Reagan Doctrine to fend off criticism of their votes, actions in office and positions.  Sorry, but that dog won’t hunt if Blundo decides to bludgeon Hafen over his record of feeble non-accomplishment.

The Accidental Assemblyman concluded his missive of desperation with this gem…

“As we move into the 2022 Election Cycle, it is imperative that we support incumbents and work together to secure more Republican seats to take back our state.”

There’s absolutely NO REASON to support a weak, spineless GOP incumbent – especially in a safe Republican district that will remain in Republican hands if voters decide to upgrade to a true conservative fighter.

Mr. Muth is president of Citizen Outreach, a conservative grassroots advocacy non-profit, a veteran campaign trainer and consultant and publisher of Nevada News & Views.  His views are his own.

The Center SquareMay 11, 2022
Read More
Scroll for more
Tap
And Politicians Still Wonder Why No One Trusts a Word They Say?
Bad Day at the Badlands for Taxpayers; Good Day for Property Owners