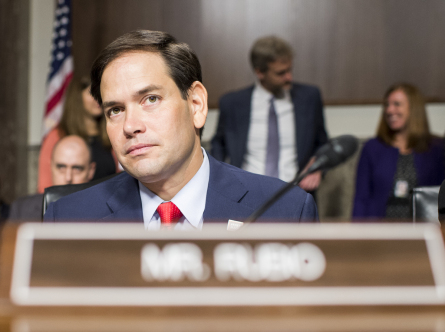 Sen. Marco Rubio, R-Fla., takes a seat at a hearing in the Senate. (Photo By Bill Clark, CQ Roll Call)

(Matthew Fleming, Roll Call) – If drawing the attention of the Democratic front-runner is a sign of strength, then Sen. Marco Rubio is rising in stature.

Clinton went so far as to compare Rubio’s comments to those Donald Trump made about women before, during and after the debate — comments she called “offensive” and “outrageous.”

“But what Marco Rubio said has as much of an impact in terms of where the Republican Party is today as anybody else on that stage, and it is deeply troubling,” Clinton said Monday in New Hampshire.

During the debate, Rubio said he’d never advocated for any kind of exceptions to abortion bans, although that statement needed to be clarified later.