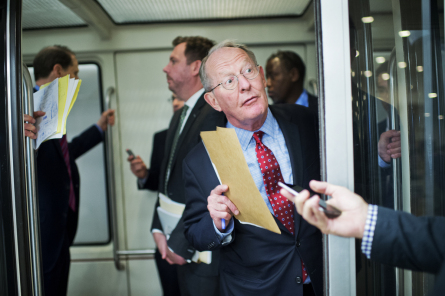 Lamar Alexander shepherded the No Child Left Behind rewrite through the Senate. (Photo by Tom Williams, CQ Roll Call)

(Steven Dennis of Roll Call) – No Child Left Behind is a step closer to a major overhaul giving far more flexibility to states to act — or not — on poorly performing schools.

The vote on the Senate bill — 81 to 17 — sends it to a conference with the House bill, which the White House threatened to veto.

The Senate bill doesn’t have a veto threat hanging over it — but President Barack Obama hasn’t said he’d sign it either. His advisers and Education Secretary Arne Duncan have been pushing hard for the bill to have requirements that states not only continue testing students to determine performance, but take action if schools continue to fail year after year after year.

Sen. Lamar Alexander, R-Tenn., who has spoken with the president this year on the issue, understands the need to get the White House on board. The chairman of the Health, Education, Labor and Pensions Committee is a former education secretary, governor and White House congressional liaison.