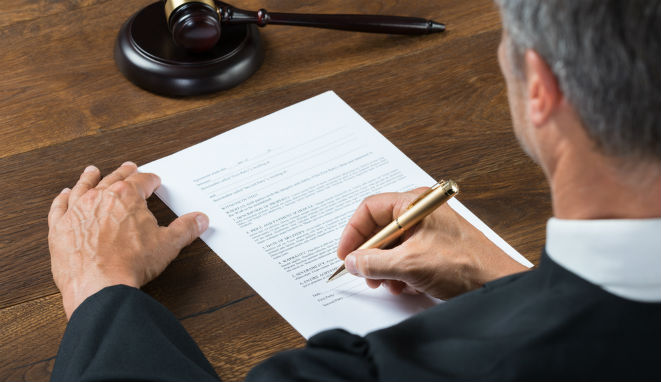 (Chuck Muth) – Last week the Nevada Supreme Court issued a ruling that was described as ushering in a “sea change” for how people who have been arrested could be released without posting bail.  Social justice warriors immediately began the Snoopy Dance.

But these folks would be wise to remember the old admonition about being careful what you wish for.

Many, on the left and the right, agree on social justice reforms that keep people locked up who we’re are afraid of, not who we’re mad at.  So the Court’s decision gets it half right.

Releasing accused non-violent offenders who pose no risk to the community and are likely to show up for their day in court, in most cases, probably SHOULD be released on their own recognizance.

But releasing potentially dangerous accused criminals, many of whom would surely blow off their day in court, simply because they’re “poor” is another thing altogether.

The Court’s decision, issued by soft-on-crime Justice James Hardesty, requires that prosecutors “must prove by clear and convincing evidence that bail, rather than less restrictive conditions, is necessary to ensure the defendant’s appearance at future court proceedings or to protect the safety of the community.”

But here’s the kicker:  Judges must take into account the defendant’s financial resources and document, in writing, their reasoning for making their bail decisions.

Now, unless someone can give me an argument to the contrary, I don’t have a problem with judges explaining themselves in making these decisions.  But I don’t care if the defendant is rich or poor if they’re likely to flee or pose a danger to the rest of us.

According to a story on the decision by the Las Vegas Review-Journal, Deputy Criminal Defender Christy Craig “argued that setting a bail meant a judge agreed that a defendant was not a danger to the public, but poorer people remained behind bars because they could not afford to make payments.”

This is an absurd argument.

First, just because a judge allows an accused criminal to be released on bail does NOT mean they’re not a flight risk or pose danger to the public.  What it means is that, in the judge’s opinion, the accused criminal is less likely to skip out or pose such a danger to the community out of fear that he or she will lose their bail money.

It’s a judgment call.  The very essence of being a “judge.”

Secondly, any accused criminal who can’t afford to pay the full bail amount in cash must get a bail “bond.”  Essentially, a loan.  Which includes a 15% down payment and being able to get someone – a relative, friend or associate – to cosign for the loan at the risk of having to pay it back in full if the accused goes on the lam or re-offends.

Look, if the people who know you best aren’t willing to vouch for you and stick their own financial neck out, you probably should remain behind bars.  I’m just saying.

Now, about those “poor” defendants…

A recent case was brought to my attention last week.  An accused drug trafficker, facing a potential 100 years in prison if convicted, had bail initially set at $100,000.  And because he was “poor,” he was represented by a taxpayer-funded public defender.

In a follow-up court appearance, this guy – who was supposedly so “poor” that he qualified for legal representation courtesy of taxpayers – had his bail reduced to $10,000.  And guess what?

Now, about that be-careful-what-you-wish-for thing…

The Court’s decision orders judges to consider “less restrictive conditions” as an alternative to bail.  That includes “house arrest.”

So while “poor” defendants released on house arrest don’t have to put up bail money, they’re, um, confined to their house.  That’s what “house arrest” means.  No trips to the grocery store, but more importantly, no job.

Yeah, ordering more people into house arrest is certainly a benefit to the “poor.”

The reality is, many accused defendants CHOOSE bail over house arrest because being out on bail affords them far more freedom than being confined with an ankle bracelet at home.

You know, like us healthy, law-abiding citizens who have been sentenced to house arrest by Gov. Steve Sisolak, albeit without the ankle bracelet (for now), during the coronavirus hysteria.

But that’s another subject for another time.

The ruling stipulated that prosecutors and judges should continue to take into consideration the defendant’s “character and ties to the community, his or her criminal history, and the nature of and potential sentences for the alleged offenses” in making bail decisions.

But Clark County District Attorney Steve Wolfson observed, the “analysis doesn’t change much, but some of the processes that are going to be utilized are tweaked.”

So much for a “sea change.”  More like a ripple.

“The ‘Brick Man’ is out of jail again — but this time he has the coronavirus to thank for his freedom.

“Anthony Manson – a 50-year-old ex-con who earned his nickname by allegedly using the construction material for multiple smash-and-grab burglaries – was released this week with the consent of the Brooklyn District Attorney’s Office, The Post has learned.

“Manson became a poster boy for the state’s controversial bail reform laws – after being repeatedly cut loose following arrests for alleged burglaries – before he was finally held on bail in January over the back-to-back arrests.

“The DA’s office confirmed that Manson was released Tuesday after an attorney from the Legal Aid Society argued that he is at risk for catching COVID-19 at Rikers Island.”

Mr. Muth is president Citizen Outreach a non-profit grassroots advocacy organization.  You can get free updates and breaking news on this issue by going to: http://stopcatchandrelease.com