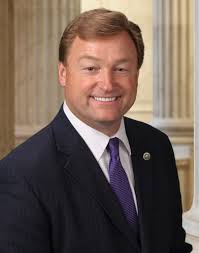 (Ray Hagar, Nevada Newsmakers) Sen. Dean Heller, R-Nv., called for the end of corporate and union campaign donations in federal elections Wednesday, which have skyrocketed since the  “Citizens United” Supreme Court decision in 2010.

Heller did not call directly for the repeal of the Citizens United ruling — which allows corporations, unions and the wealthy to spend unlimited amounts of money on election campaigns — just that union and corporate campaign spending be limited.

Heller noted how spending for his current U.S. Senate seat has skyrocketed since the Citizens United ruling of 2010.

“My election four years ago (2012), between the two candidates and the outside interests, cost $50 million,” Heller said. “I think between (current U.S. Senate candidates Catherine Cortez) Masto and Joe Heck, it will be north of that. I’m guessing between $70 million and $75 million.

“But to put this in perspective, six years prior to my election, (Sen.) John Ensign’s re-election, the candidates together, they spent $6 million. So in six years, it went from $6 million to $50 million. There is way too much money in politics and I’d like to see some effort to change that.”

Democrats have bemoaned the fact that the Citizens United vs. the FEC ruling has benefited Republicans more than their party. Many Democrats have also called for it repeal. IRS and Federal Election Commission records from 2013 showed that conservative nonprofits that received tax-exempt status since 2010 overwhelmed liberal groups in terms of money spent on politics.

Union spending, however, was big before the Citizens United ruling and Heller said it must also be curtailed.

“With the ruling on Citizens United, the unions were always free to spend all the money they wanted to,” Heller said. “And in fact, it was the Right that said that was unfair. Of course they (unions) were pouring 95 percent of their money into Democratic races, so unions were able to do it all along. What Citizens United did was allow corporations to do the same thing.”

“I don’t think he is losing any money in this process,” Heller said of Reid. “He is raising just about as much money as he wants, to protect the people on his side.”

The funding competition of U.S. Senate campaigns is fierce between the Republicans and Reid’s Democrats, Heller said.

Both parties are seeking to gain the majority in the 115th Congress that begins next year.

“If the election was held today, I think the Senate would be 50-50,” Heller said. “So that tells you how intense that has gone over the last month or so, the effort to raise money.”

Heller’s appearance on Nevada Newsmakers came on the same day that a Monmouth University poll showed GOP presidential nominee Donald Trump is up by two points in Nevada over Democrat Hillary Clinton.

“I always compare everything to four years ago when (Republican Mitt) Romney was running and frankly, he (Trump) is doing better (in Nevada) than Romney was at this point, two months out,” Heller said. “Trump is stronger (than Romney in 2012) and a lot stronger than people anticipate.”

Heller likes Trump’s chances of beating Clinton.
.
“Like I have said, if he (Trump) is with five points (within Clinton) come election time, I think he has a chance of winning this thing.”

Heller however, is not a Trump fan.

“I can tell you with certainty that I am not voting for Hillary Clinton,” Heller said. “But I’m probably about 90 percent sure that I am not voting for Donald Trump. I am looking for a redeeming value as to why — outside of the fact that he has an R by his name — I should support Donald Trump and I have not come up with that value up to this point.”

Heller had this to say about Cortez Masto’s campaign: