Shake Your Fist and Do the Tarkanian Twist

Shake Your Fist and Do the Tarkanian Twist
N&V Staff 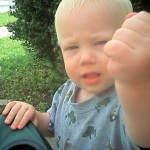 On Saturday Republican U.S. Senate candidate Danny Tarkanian put out yet another attack piece against fellow conservative Republican candidate Sue Lowden which contains a kernel of truth but with a liberal dose of word-twisting, false claims and misleading innuendos. Here’s what Danny wrote:

“Candidate Sue Lowden claims she never voted for a tax increase, even as she defends the bailouts. But today’s Las Vegas Review-Journal reports that ‘several times in 1993, during her first session in the Legislature, Lowden voted to impose higher taxes or fees on everything from limited liability corporations to water distribution to slot machines.’

“Even worse, State Senator Sue Lowden supported and voted for the infamous Nevada ‘Jobs Tax’ which imposed a $100 per year tax on every job created in Nevada. . . . Now that you know that Sue Lowden broke the No Tax Pledge and repeatedly raised taxes on Nevadans, re-read her 2009 letter to Nevada Republicans. Sounds sort of hollow.”

First, I don’t recall Lowden ever saying she “never voted for a tax increase.” If so, it’s incumbent upon the Tarkanian camp to back that claim up. If they can’t, they ought to stop making it.

Secondly, if the reports are true that Lowden voted for some tax and fee increases in her freshman year as a state senator in 1993, that doesn’t mean she broke the Taxpayer Protection Pledge….because she hadn’t signed it.

Indeed, and I’ll have to verify this, but I don’t think there even WAS a Taxpayer Protection Pledge for state legislators back then. Indeed, on ATR’s Q&A webpage about the state pledge, the organization indicates that the state legislator version of the Pledge wasn’t adopted and distributed until more than a decade after Sue Lowden first ran for the Senate:

In addition, the wording of the Pledge which Sue HAS signed this year in the U.S. Senate race wouldn’t have applied to the taxes/fees Tarkanian references even if it had been available and she had signed it in 1991. Here’s the exact wording of the federal Pledge in question:

“I, (insert name), pledge to the taxpayers of the state of (insert), and to the American people that I will: ONE, oppose any and all efforts to increase the marginal income tax rates for individuals and/or businesses; and TWO, oppose any net reduction or elimination of deductions and credits, unless matched dollar for dollar by further reducing tax rates.”

So while then-Sen. Lowden may have voted for the $100 employee head tax back in 1993, that doesn’t mean she “broke the No Tax Pledge.” If she did, in fact, vote for the head tax….then that’s a very legitimate issue for Tarkanian to raise. But twisting that fact into something which is NOT true isn’t.

Lastly, others may disagree, but I find it far less compelling to cherry-pick a few wayward votes 17 long years ago than determining where a candidate is today. And after all, what’s the old saying about he who is without sin?

Although, to be honest, Danny never committed any such sins.

Then again, that’s because he’s never been elected to anything.

But back to the main point: Sue Lowden apparently wasn’t perfect on each and every tax/fee vote in 1993 when she was a freshman state legislator; however, she was FAR better than most and became even more of a tax hawk in her second term and as Chairman of the Taxation Committee.

And as even the Tarkanian campaign admits, as Chairman of the Nevada Republican Party last year, Lowden not only personally expressed opposition to any tax hikes for the 2009 Legislature, but she went so far as to risk angering and alienating the tender sensitivities of some longtime GOP incumbents by sending each of them a letter at the beginning of the session urging them to oppose tax hikes and sign the Taxpayer Protection Pledge.

Don’t take my word for it. Read it HERE

No, Nevada’s conservatives, Republican primary voters and taxpayers have nothing to worry about when it comes to Sue Lowden’s opposition to tax hikes today.

What they DO have to worry about is the fact that I’m the one who always seems to have to point these things out and correct the record instead of her official campaign.

Remember, it’s not the best candidate who wins races; it’s the best campaign. And this one, from a communications position at least, ain’t exactly running on all cylinders yet.

N&V StaffOctober 3, 2021
Read More
Scroll for more
Tap
Proven Leadership, Commitment to Principles
Lowden: In It to Win It