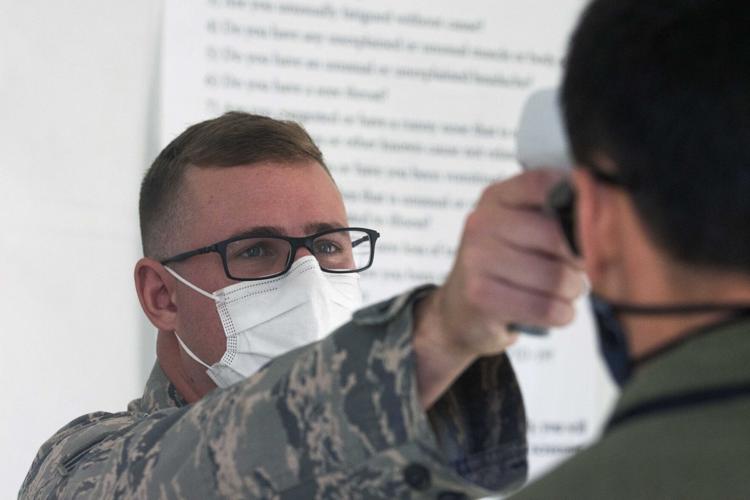 A member of the Nevada National Guard performs a temperature check during the second day of the 32nd Special Session of the Legislature, Saturday, Aug. 1, 2020 in Carson City, Nev.
David Calvert/Nevada Independent via AP, Pool

Senate Bill 440 would affect nearly 4,400 active servicemembers and their households, according to estimates by the governor’s office. The holiday would be observed every Nevada Day, which is October 29.

If passed, the bill would revise state eligibility requirements to waive certain sales and use taxes for service members who are deployed abroad for longer than 30 days.

Those who wish to take advantage of the benefits would have to submit a letter of exemption within 30 days of Nevada Day, the bill says. The exemption would expire annually on December 31, and service members would need to re-submit their letter in order to receive the benefits.

“Throughout the last year, the men and women of the Nevada National Guard have stepped up as the heroes we needed during the COVID-19 crisis,” Sisolak said in a statement. “To date, the COVID-19 pandemic is the largest and lengthiest state activation in the Nevada National Guard’s 160-year history. This sales tax holiday is one way we can show our deep gratitude and appreciation for all the Nevada Guard does for the Silver State, home and abroad.”

In response to the COVID-19 pandemic, Sisolak activated the National Guard in early April after the state’s emergency declaration was accepted by the federal government. The service members provide personnel for COVID testing, contract tracing, laboratory and logistical operations, and goods distribution.

In all, over 1,400 citizen soldiers and airmen have supported the state’s pandemic response efforts, Sisolak said. Most recently, the soldiers have increased their response operations to support vaccine distribution and administration.

Maj. Gen. Ondra Berry, Nevada’s adjutant general, said he is proud of the work the National Guard has done during the pandemic.

“Throughout this historic, unprecedented state activation, members of the Nevada National Guard showed they are always ready, always there as neighbors helping neighbors,” Berry said in a statement.