Sit your [censored] down!

Sit your [censored] down!
N&V Staff

(Michele Fiore) – Does it surprise you as much as it does me what stories the media reports about the Nevada legislature? It was never my intention to “get press” when I lashed out at one of my peers on Tuesday for displaying behavior that was not only disrespectful to me and my colleagues but also to our constituents for wasting their taxpayer dollars by using chamber time in such a careless fashion.

I warn you, the video and graphics below aren’t censored. 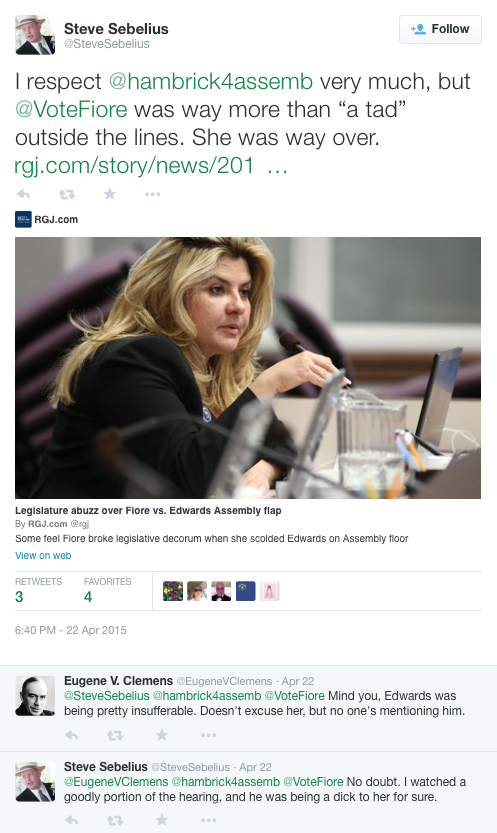 While I don’t apologize to Assemblyman Edwards, I do apologize to the other 40 members of the Assembly for speaking out of turn. I’m just disappointed this is overshadowing the real issues we’re working on.

Since Tuesday was our second major deadline where bills, that aren’t exempt due to a fiscal note, were required to be passed by their house of origin. I’m excited to report that 7 of our bills are still moving forward.

Assembly Bill 164 has been assigned to the Senate Committee on Health and Human Services. I have referred to this bill the Right to Try bill because it gives constituents just that. This bill will allow patients, who have been given a terminal diagnosis the right to try any experimental, or non-FDA approved, method that they like.

Assembly Bill 167 is a bill that will authorize firearms to be carried and stored on the premise of a foster home. Currently, the law requires all firearms on the premises of a foster family home to be unloaded at all times when children are present, and for ammunition to be stored in a separate locked box. This legislation makes it impossible for CCW holders, including law enforcement members, to bring a foster child into their home. This new law will rewrite this language to allow these law-abiding citizens to be foster parents, while still ensuring the safety of these children.

Assembly Bill 148, commonly referred to as Campus Carry, has been referred to the Senate committee on Judiciary. This bill will allow CCW holders to carry not only on college campuses, but also in any building that does not have a metal detector.

Assembly Bill 281 is another bill that has been referred to the Senate Committee on Judiciary. This bill helps to get Nevada’s traffic laws in sync with 37 other states. Currently, Nevada law is written so that you could be arrested for something as minor as speeding, which is a misdemeanor.

Assembly Bill 404 is another bill relating to firearms. This bill allows CCW holders to submit an application for their permit renewal before their current permit has expired, and it states that their current permit will remain valid until the Sherriff approves or denies their application. This is a bill that will protect Nevadans from being temporarily left without a valid permit because they are waiting on an application to be approved.

Assembly Bill 356 has been referred to the Senate Committee on Commerce, Labor and Energy. This bill puts regulations on picketers, ensuring that innocent people are not attacked or harmed by the people and organizations that are exercising their freedom of speech.

Assembly Bill 357 is a bill that will allow constituents who have been convicted of a non-violent felony to have their right to bear arms, serve on a jury and vote restored if they met certain requirements. This bill has been referred to the Senate committee on Judiciary.

In addition to these 7 bills that have passed through the Assembly there is 1 bill that we need to keep a close eye on. AB 266, a bill that will require a voter has a valid ID with them when casting a ballot in person. It will also require the DMV to issue an ID free of charge to anyone who cannot obtain one otherwise.

To hear more about where these bills, and others from the Assembly, stand tune into “Walk the Talk with Michele Fiore” this Saturday from 9am – 10am on KDWN 720AM. This week Assemblyman Brent Jones joins me to give his insight on Tuesday night’s Floor session, as well as to share with us his thoughts on the bills that have been introduced this session.

With just a little over a month left in the session it is time focus on what really matters, passing legislation that benefits Nevadans. I will not let the media, or anyone else, draw attention away from the issues that most of us here in Carson City are working to resolve.

Fiore is the Republican representative for Assembly District 4 in Las Vegas and also the Chairman of the Assembly Policy Committee. You can reach her at Michele.Fiore@asm.state.nv.us.