Sorry, Meryl but that hypocritical anti-Trump rant was easily the worst performance of your career (apart from that time you gave a child rapist a standing ovation)

Sorry, Meryl but that hypocritical anti-Trump rant was easily the worst performance of your career (apart from that time you gave a child rapist a standing ovation)
N&V Staff 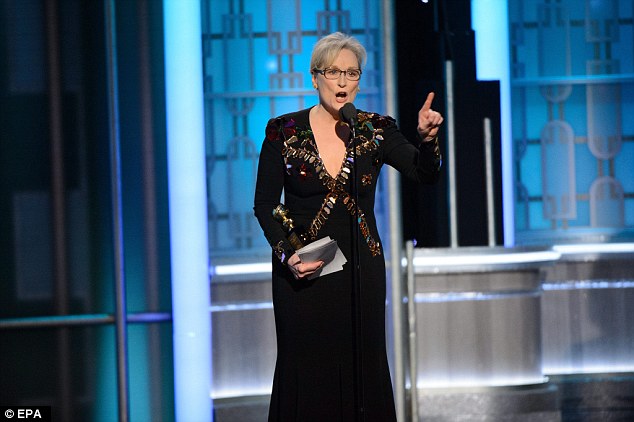 Just when I thought we’d exhausted the reservoir of Trump-hating luvvies, up pops the biggest star in Hollywood to join the bandwagon and stick one more stiletto-heeled boot into the President-elect ten days before his inauguration.

Let me make one thing clear before I continue: I love Meryl Streep.

She’s the greatest actress in history (and not, as Trump disingenuously tweeted today, ‘one of the most overrated in Hollywood’!). She’s also, and I speak from personal experience, a delightful woman – incredibly smart, warm, funny and decent.

In fact, there’s no better role model for any budding actor, or finer example of true feminist power at its very best.

So when she speaks, the world listens.

Last night, Streep received a Lifetime Achievement award at the Golden Globes, and chose the moment to launch a very personal attack on Donald Trump.

She began by saying that Hollywood, foreigners and the press are ‘the most vilified segments of American society right now’.

At which point, the cameras panned out to hundreds of the richest, most privileged people in American society sitting in the audience in their $10,000 tuxedos and $20,000 dresses, loudly cheering this acknowledgement of their dreadful victimhood.

She then said that if all the ‘outsiders and foreigners’ were kicked out of Hollywood, ‘you’ll have nothing to watch but football and mixed martial arts, which are not the arts.’

I haven’t heard such elitist snobbery since Hillary Clinton branded Trump supporters ‘a basket of deplorables’.

For your information, Ms. Streep, tens of millions of ordinary Americans love football and the MMA and would be quite happy watching their favourite sports at the expense of the next Woody Allen film.

Her real target, though, was Trump. She’d come to take him down, and that is exactly what she proceeded to do.

‘There were many powerful performances this year that did breathtaking, compassionate work,’ she said. ‘But there was one performance that stunned me. It sank it hooks in my heart, not because it was good – there’s nothing good about it. But it was effective and it did its job. It was that moment when the person asking to sit in the most respected seat in our country imitated a disabled reporter. Someone he outranked in privilege and power and the capacity to fight back.’

‘It kind of broke my heart when I saw it,’ she cried, ‘and I still can’t get it out of my head. This instinct to humiliate when it’s modeled by someone in the public platform, by someone powerful, filters down into everybody’s life because it kind of gives permission for other people to do the same thing.’

For starters, the incident to which she referred didn’t happen last year, it happened in 2015. There’s even been another Golden Globes in between then and now, at which it was never mentioned.

Second, Trump has always furiously denied – and has again today on Twitter – he was mocking the reporter’s disability and a Conservative website produced video evidence of numerous other instances where he made the exact same gesture to fully able-bodied people when attacking them.

Third, the reporter is hardly a powerless individual with ‘no capacity to fight back’; he’s a long-time Pulitzer-prize winning investigative journalist at the New York Times, a paper that’s trashed Trump for decades.

But putting all that to one side for a moment – and if Trump WAS mocking a man’s disability then I agree it was disgraceful – let’s move to what Streep said next: ‘Disrespect invites disrespect. Violence incites violence. When the powerful use their position to bully others, we all lose.’

At this point, I laughed out loud with incredulity.

Not at the words themselves, which are laudable.

No, it was at the hypocrisy.

You’d be hard-pushed to find an industry that encourages more disrespect and violence than Hollywood.

A place where rich powerful people make billions of dollars by regularly pandering to the lowest common denominators of sexism, racism, homophobia and misogyny.

And seethe from every tinsel-encrusted pore with the very kind of nasty, power-based bullying that Meryl Streep claims to be so incensed by in Trump.

So great though her censorious words indisputably are, they would be perhaps better directed at her own back yard.

To highlight just one example of Streep’s shocking hypocrisy, what about the 2003 Oscars when she leaped to her feet and gave child rapist Roman Polanski a standing ovation after he was announced as winner of Best Director for The Pianist?

She was joined by numerous superstars in the room, many of whom were also seen on camera last night applauding and cheering as Streep attacked Trump’s supposed immorality.

Clearly, their collective high moral values are a movable feast.

At the end of her speech, Streep launched a passionate defense of the press. ‘They’ll need us to safeguard the truth,’ she said.

Now, I’ve been a journalist for over 30 years. I love my industry, warts and all, and I welcome any support.

But when it comes to the truth, many parts of America’s media were found severely wanting in this election campaign.

Frankly, a lot of the coverage was a fact-starved partisan disgrace as they fought to see who could sink deeper into the tank for Hillary Clinton.

The mainstream US media, having gleefully fuelled Trump’s candidacy for months to suit their own self-serving commercial interests, then turned on him like spitting cobras when he looked like he might actually win.

It’s also a fact that no president in modern times has been so anti-press, or so intent on attacking press freedom, as Barack Obama, one of Streep’s heroes.

Under his administration, the US government has set a new record for withholding Freedom of Information Act requests. Obama’s also used the Espionage Act to prosecute whistleblowers who leak to journalists more times than all previous administrations COMBINED.

So yes, the stench of hypocrisy throughout Streep’s speech was putridly pungent.

My overriding disappointment though is that she missed a massive opportunity to do something really constructive.

How much more effective would it have been had the most powerful woman in Hollywood called for unity not division, demanded a stop to all the teeth-gnashing and wailing over the election result, and urged Donald Trump in his inauguration speech to preach tolerance, fairness and equality?

That would have been a truly courageous and admirable thing to do.

Instead, Meryl Streep poured another 100 gallons of oil onto an already inflamed toxic fire.

She will get exactly what she wanted: today, she’s the toast of Hollywood, the darling of social media and a heroine to every Millennial in the world.

I’ve seen people on my Twitter feed say they actually wept with joy at her words.

But the reality is that she’s also enraged tens of millions of Americans who voted for and like Donald Trump, not to mention those who love their football and MMA.

And she’s simply re-confirmed to them what Mark Wahlberg said a few weeks ago when he urged actors not to talk about politics:

‘A lot of Hollywood is living in a bubble. They’re pretty out of touch with the common person, with the everyday guy out there providing for their family.’

Meryl, I still love you dearly, but you had a chance to bring your country together last night and you blew it.

N&V StaffSeptember 8, 2022
Read More
Scroll for more
Tap
Knecht & Lawrence: An Inspiration Moves On
Why You Should Never Believe Anything the Teachers Union Says