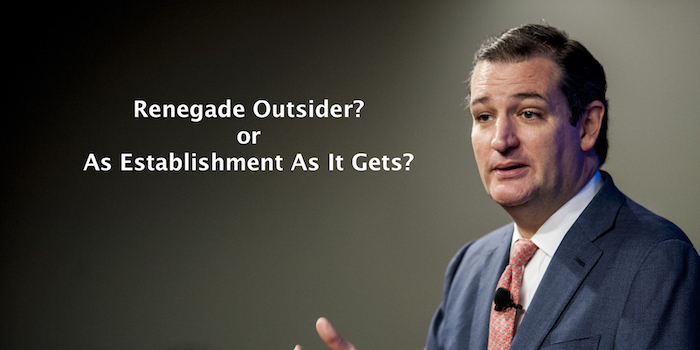 As much as an “outsider” he pretends to be, this guy is a professional, career politician who has surrounded himself with the same kinds of disingenuous – if not outright dishonest – professional political consultants that the “insiders” use.

It was total B.S. – especially since it was sent to me, a known Donald Trump supporter.

This disingenuous headline presents the perception that it is indeed “confidential” and shouldn’t be shared with Trump supporters even though everyone and anyone knows that any mass email is going to be leaked to the world ESPECIALLY if it IS truly confidential.  Which this wasn’t.

Nor do I believe for an instant that it came from “the personal desk of Ted Cruz.”  In reality, it came from the laptop of someone from Cruz’s fundraising team.

This entire “confidential” email was nothing more than a disingenuous pitch for more money for Cruz’s campaign.

The most ironic part of the body of the pitch was the claim that voters “know Donald Trump will say or do anything to get a vote.”  As if Cruz wouldn’t and isn’t doing the EXACT same thing.

Remember the under-handed dirty trick his campaign pulled on Ben Carson in Iowa?

But then comes the real cookie-cutter, inside-the-beltway, template whopper…

“My closest advisers have set a must-hit goal to raise $500,000 by Friday, April 8th, at noon. That means we need everyone reading this email to chip in at least $5 — or even $35 or $100 — whatever you can afford. But I need your donation before Friday at noon.”

His “closest advisers.”  Unnamed.  Of course.

In the amount of $500,000 – a figure surely pulled out of either (a) thin air or (b) somewhere where Cruz can see his own pancreas.

Before “Friday at noon.”

Why?  No reason.  Just because the professional fundraising consultants know that including a deadline will increase response rates, even if the deadline is a total fabrication.

The “ask” is for anywhere from $5 to $1,000 – showing this was indeed emailed to a mass email “spam” list.  They are throwing shinola up against the wall and hoping some will stick.

The whole thing is total BS written by highly-paid, inside-the-beltway political consultants in their high-priced offices, not from “the personal desk” of the candidate.

Frankly, the whole thing is one…big…lie.

And if Cruz is elected, even though he may be the more conservative of the remaining GOP presidential candidates, these same political insiders he has surrounded himself with for the campaign will be calling the shots and pulling the same crappola on us that the Establishment Republicans have been pulling on us for years.

Sorry, Cruzers.  Ted ain’t the savior conservatives have been looking for.  A false prophet.

He’s one of them even though he likes to paint himself as one of us.