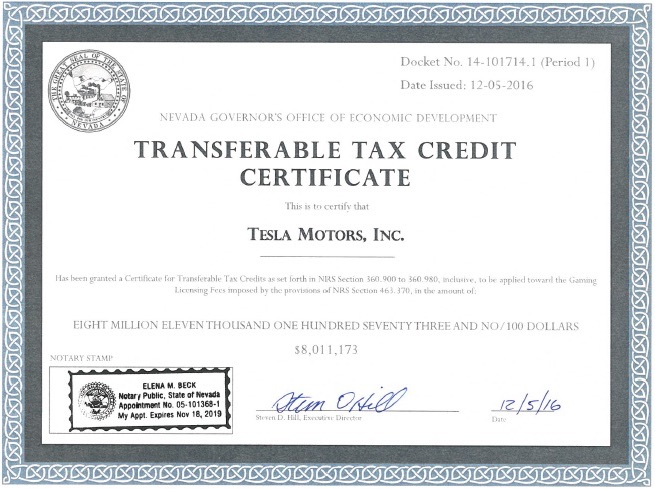 (Thomas Mitchell, 4TH ST8) – Nevada keeps handing out money to Tesla Motors even though it is not coming close to living up to projections made when the Legislature in 2014 agreed to $1.3 billion in tax breaks and credits in return for the company building a $5 billion, 10 million-square-foot factory battery factory near Sparks.

This week the Governor’s Office of Economic Development agreed to provide Tesla with $8 million in transferable tax credits, bringing the firm’s tax credits to more than $35 million so far, even though the company has created only 331 jobs so far, well under the projected 1,700 jobs, according to a 2014 analysis of the project by Applied Economics.

The factory’s capital investment is also falling short — with only $600 million invested so far, compared to a projected $2 billion.

Since the company has almost no tax liability in Nevada the tax credits can be sold, presumably at a discount, to companies who owe taxes. Previously, Tesla has sold $20 million in tax credits to MGM. The certificate for the $8 million specifies it is to be applied to gaming licensing fees.

N&V StaffOctober 4, 2022
Read More
Scroll for more
Tap
27 Real-Life Success Secrets from the Next President of the United States
Knecht & Lawrence: No Room for Faithless Electors