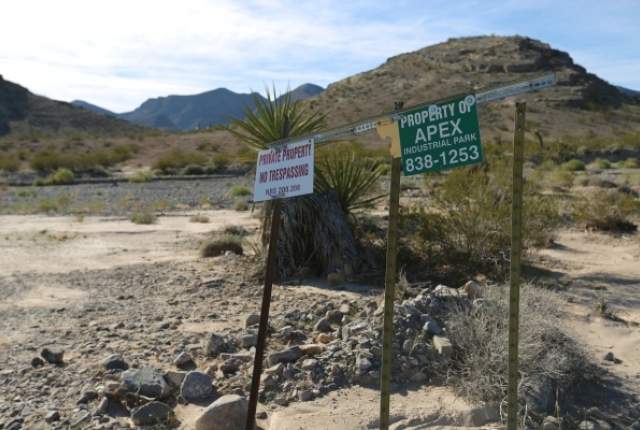 (Chuck Muth) – Once upon a time, in a land far, far away from downtown North Las Vegas, there was a desolated piece of virtually uninhabitable property known as the “Apex Industrial Park.”

Indeed, the only business outpost there has been a truck stop serving intergalactic travelers from the planet Utah and places beyond.

When our story began just a couple short years ago, NLV was on the brink of fiscal disaster.  The municipal government version of bankruptcy.  But then Sith Lord John Lee was elected mayor and embarked on a seemingly impossible mission to use Apex to rescue his city.

You see, if Apex could be developed into a huge center of industrial and commercial activity, the resulting tax revenue would save North Las Vegas from the fiscal fate Lee’s predecessors left him with.

The problem: Apex is located so far north of town, in an area with no infrastructure – water, power, sewer and transportation – that no business or industry could afford to hang a shingle there.

And North Las Vegas sure as shootin’ didn’t have the hundreds of millions of dollars to do the ol’ “if we build it they will come” routine.

In fact, the situation was so bad that even the state’s nascent and controversial legal marijuana industry was unable to use the land to open operations.  I mean, how bad does it have to be that even drug dealers can’t find a way to make it work, right?

Faraday is an electric car manufacturer – financed by a shadowy Chinese tech industry billionaire with no auto-making experience – that has yet to, well, manufacture a single car.

I mean, what could go wrong there, right?

But that didn’t stop Emperor Brian Sandoval (R&R-Advertising) from taking a riverboat gamble on Faraday.

After all, if the company craps out it will only be Nevada taxpayers on the hook, not him.  And by that time he’ll be out of office and living the sweet life on the board of directors of some gaming company or as an executive with R&R Advertising.

In essence, as best as I can decipher this deal, Faraday Motors has agreed to front the money to develop Apex and build the infrastructure necessary to make the outpost habitable by all manner of other businesses and, in the process, essentially bail out North Las Vegas.

In return, Nevada taxpayers will be subsidizing Faraday’s “investment” by absolving it from hundreds of millions of dollars of taxes it otherwise would have to pay – taxes that other Nevada businesses have been paying for years, in some cases decades, and will continue to pay.

Taxes that were supposed to be used to pay for things like, um, well, infrastructure.

Bravo to Lee for seeing the opportunity and “guilting” state elected officials into giving his town the same sweetheart deal it gave the city of Sparks in northern Nevada with the Tesla Giga-Giveaway.  I don’t blame him one bit for pursuing this deal.

But that doesn’t excuse state legislators from taking such a monstrous risk with OPM – Other People’s Money.

If the gamble pays off, those legislators will be seen as champs.  If not, we, the people, will seen as chumps.

With that, ladies and gentlemen, I have now completed TEN (10) years as a weekly columnist in Nevada.

It all started as a pro bono column for the Nevada Appeal shortly after I moved back to Carson City from a stint in our nation’s capital in 2005.  Muth’s Truths is now published by about a dozen newspapers throughout the state.

Over the last ten years – seems like only yesterday – I’ve submitted columns, thanks to Al Gore and the Internet, each week from every part of the state, as well as from Washington, DC, Honolulu, Hawaii and everywhere in between, holidays included.

And in all that time I’ve only completely spaced my Thursday deadline once.  Not bad for an old guy on the verge of being able to hide his own Easter eggs!

Thank you for reading, even though I know we don’t always agree.  But more importantly, thank you for caring enough to be an informed voter.  Now let’s boldly go into the next millennium.