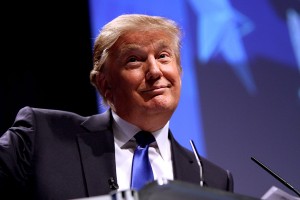 Donald Trump is taking his criticism of Hillary Clinton into new territory. The Republican frontrunner mocked his Democratic counterpart for a “disgusting” bathroom trip she made during Saturday night’s debate and said Barack Obama “schlonged” her in the 2008 primaries at a raucous rally here on Monday night.

For Trump – who comments often on Clinton’s penchant for pantsuits, has insinuated she is in a lesbian relationship with close aide Huma Abedin, and insists she doesn’t have “the strength or the stamina” to be president – Monday’s remarks take his focus on her personal life to a new level of intimacy.

Remarking on Clinton’s late return to her podium after using the bathroom during a commercial break at this weekend’s Democratic debate, Trump said, ‘I know where she went. It’s disgusting I don’t want to talk about it. It’s disgusting.'”

This is likely a harbinger of things to come next fall if both end up being their party’s presidential nominee.