The George H.W. Bush Obituary You Won’t Read In The New York Times

Manassas, Virginia – Conservative direct marketing pioneer Richard A. Viguerie, Chairman of FedUp PAC and ConservativeHQ.com, today recalled the late President George H.W. Bush as a patriot, a public servant in the sense that the old Republican establishment viewed politics, and as a paragon of old-fashioned public decorum and virtue. However, says Mr. Viguerie in a column posted in today’s www.ConservativeHQ.com, in the age of President Donald J. Trump, those who draw unflattering comparisons between Bush and Trump and wax nostalgic for George H.W. Bush’s public decorum and old-fashioned Protestant rectitude want Americans to forget that behind the gentlemanly exterior was a politician whose policies were anything but conservative, and whose greatest political legacy was breaking the Reagan coalition and undoing many of Ronald Reagan’s hard-won victories.

George H. W. Bush’s relationship with conservatives may be best illustrated by his response to a CBS television interview Howard Phillips and I had with Dan Rather at the 1984 Republican National Convention.

We pounded Bush for his lack of commitment to conservative principles and what we saw as his “inside the White House” fifth column against Reaganism.

I’m proud to say that I was then and am now a “nut” about liberty. It was later shown that what George H. W. Bush was a nut about was growing government, and driving all conservatives out of the White House, the executive branch of the federal government, and the Republican Party.

Mr. Bush’s lengthy resume was accumulated largely by being selected for posts by his establishment friends and those with whom he allied himself – he was never an agent of conservative change, rather, he was a stabilizing force to keep government aligned with establishment goals.

Nowhere was this more evident than in his influence on President Ronald Reagan and the Reagan White House.

As I explained in my book TAKEOVER, as Vice President, George H. W. Bush came to the White House with an extensive Rolodex of progressive establishment Republican friends and contacts whom he worked hard to place in key positions in the government—starting with his campaign manager and fellow Texan, James Baker, as chief of staff at the White House. With Jim Baker in that key role, it became that much harder to place movement conservatives in other policy-making positions in the government.

Vice President Bush, Senator Howard Baker, Congressman Bob Michel, and the rest of the establishment Republicans in Washington weren’t necessarily bad people, but their lack of commitment to the conservative principles that Reagan ran on, and that grassroots conservatives expected the GOP to deliver on, meant that the debate that went on in the Republican primaries between Big Government Republicans and the Reaganites who wanted to shrink government never really ended.

In 1988 George H.W. Bush ran what was arguably one of the most conservative campaigns for President of the modern era.

From the Second Amendment to American exceptionalism to the right to life that Bush had once opposed by backing Roe v. Wade and abortion on demand, George H. W. Bush hit all the notes conservatives were hoping to hear from the Republican presidential candidate and emphasized the social issues establishment Republicans always do their best to avoid.

Absent the acceptance speeches of Barry Goldwater and Ronald Reagan, I doubt there was ever a more conservative acceptance speech delivered at a Republican National Convention. Many of the voters who voted for Bush based on his acceptance speech didn’t realize it, but they were voting for speechwriter (now Wall Street Journal columnist) Peggy Noonan, not George H. W. Bush. And the fiscal conservatives and small-government-types were particularly cheered when their newly nominated Republican candidate for president, George H. W. Bush, said: 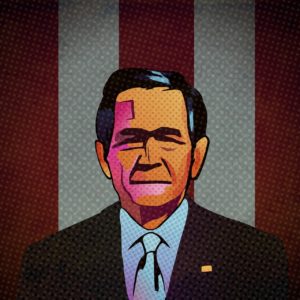 George H.W. Bush, running for the third term of Ronald Reagan would handily win the 1988 election, but that line, “Read my lips: no new taxes,” and George H.W. Bush’s lack of commitment to the principles behind it, would be the rock upon which his presidency would founder.

As the establishment media rushes to make the late President George H.W. Bush a saint of bipartisanship conservatives ought to remember the real George H.W. Bush and heed the political lessons available from an honest review of his record.

Patriot, a public servant in the sense that the old Republican establishment viewed politics, and a paragon of old-fashioned public decorum and virtue he most certainly was, but he was, just as certainly, not a conservative.

Those of us who have been around conservative politics for a while remember the smirk on Democratic senator George Mitchell’s face when he conned George H. W. Bush into abandoning his “read my lips” promise to oppose new taxes.

If “Read my lips: no new taxes,” was the most memorable line of the 1988 campaign, George H. W. Bush’s decision to abandon that commitment was, politically, the most momentous act of his presidency.

The decision to go back on his pledge not to raise taxes didn’t take place until well into his term. But Bush’s betrayal of the Reagan Revolution started the minute he took the oath of office.

Within hours of Bush’s inauguration establishment Republicans, such as James Baker III, who had opposed many of Reagan’s initiatives from within the administration, were promoted. But throughout the government Reagan’s conservative appointees, many of whom were loyal Republicans who had supported Bush, were forced to resign, were stripped of their duties, or were summarily fired by a new administration that wanted no part of the relatively few movement conservatives left in the government on the day Ronald Reagan departed Washington for California.

During Reagan’s presidency conservatives frequently said, “Personnel is policy,” and Bush’s Inauguration Day massacre was a sure sign that he intended to abandon Reagan’s policies, and his principles.

While most commentators tend to focus on “Read my lips,” Bush quickly walked away from conservative principles on a long list of policies and decisions.

I could go on—the point is, establishment media commentators tend to focus on “Read my lips” to sum up Bush’s administration, but there were a host of policies where Bush deviated not just from Reagan’s principles of government, but from conservative policy goals that had broad grassroots support.

While it was hard for Bush and his advisers to believe that he could go from over 90 percent approval when Operation Desert Storm ended in 1991, to getting just 37.5 percent of the popular vote in the 1992 election, it is easily explained when you look at the litany of me-too policies he backed and the liberal bills he signed.

Support for the Second Amendment and property rights, imposing moral hazard, instead of government bailouts for failed business transactions and investors, and opposing the creation of new “protected classes” of potential litigants were all broad conservative, and Republican, principles that predated Ronald Reagan. Bush walked away from all of them and in the process not only abandoned the policies of Ronald Reagan, but he destroyed the Reagan coalition, and did serious and long-lasting damage to the Republican brand.

It will be hard for many establishment figures to accept that assessment, and no doubt I will be accused of being unkind, but one only needs to look at the Contract with America to recognize that to regain the majority in Congress and to rebuild the Republican brand, Republicans had to run away from George H.W. Bush.

Never before had Republicans engaged in an effort to so completely expunge the legacy of a Republican president only two years after his defeat, since practically everything in the Contract with America was intended to scream at voters, “We’re not George Bush!” and at least one of the provisions of the Contract, that on compensation of property owners, was intended to mitigate the harm caused by Bush’s wetlands policy.

At his passing we can and should celebrate George H.W. Bush the war hero, family man, and a human being notably generous to friends and staff.

However, in the age of President Donald J. Trump, those who draw unflattering comparisons between Bush and Trump and wax nostalgic for George H.W. Bush’s public decorum and old-fashioned Protestant rectitude want Americans to forget that behind the gentlemanly exterior was a politician whose policies were anything but conservative, and whose greatest political legacy was breaking the Reagan coalition and undoing many of Ronald Reagan’s hard-won victories.

CHQ Chairman RICHARD A. VIGUERIE, is often called the “Funding Father of the conservative movement.” Viguerie transformed American politics in the 1960s and ’70s by pioneering the use of direct mail as a means for conservatives to bypass the mainstream media. He serves as the chairman of American Target Advertising a 75-person direct marketing firm and of www.ConservativeHQ.com. The author of a number of books on politics and the conservative movement, Viguerie’s latest book is TAKEOVER: the 100-year War for the Soul of the GOP and How Conservatives Can Finally Win It. As Chairman of FedUp PAC, Mr. Viguerie’s pre-election appeal to Catholic voters in the key states of Florida, Pennsylvania, Michigan, Wisconsin and Ohio are credited by many with helping swing the 2016 election to Donald Trump.

NN&V StaffApril 29, 2020
Read More
Scroll for more
Tap
Saudi Journo No More Worthy Than A Plumber From Peoria…And the Plumber is A US Citizen
GM CEO’s Ears Aren’t Tin…They’re Steel