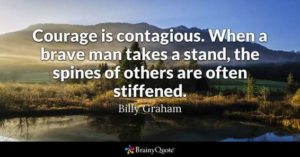 Many media types, especially the “fake news” ones, still don’t understand how conservatives, Republicans and even many relatively non-ideological voters can support Donald Trump.

Generally speaking, Trump’s “America first” policies and rhetoric have hit a nerve with Americans who are not only proud to be Americans, but believe America is the greatest country on the planet.

And they’re sick of the narrative – built up over the last couple of decades by Obama-like politicians and liberal academic eggheads – claiming we have something to apologize for and that no one country is better than any other.

Wrong.  We’re #1.  And thanks to The Trump Effect, we ain’t afraid to say it anymore.  Pride in America is back, baby!  And that sentiment transcends party and philosophical lines.

As for Republicans and conservatives, the very fact that Trump is totally unafraid to fight his opponents and call a spade a spade, political correctness be damned, is a long-awaited breath of fresh, clean coal air after decades of wishy-washy, afraid-of-their-shadow, cut-and-run GOP “leaders.”

For the last twenty-some years, Republican voters in general, and conservatives in particular, haven’t been angry at the GOP’s failure to win on key issue fights so much as the fact that GOP leaders have failed to even put up a fight out of fear of offending some group or incurring the wrath of the other party.

Not Donald Trump.  Consider this short quote from his speech in West Virginia Saturday night…

“We see this horrible, horrible, radical group of Democrats.  You see what’s happening right now.  And they’re determined to take back power by any means necessary.  You see the meanness, the nastiness.  They don’t care who they hurt, who they have to run over to get power.”

Can you imagine Republican “leaders” such as Mitt Romney, Jeff Flake, Paul Ryan or Jeb Bush ever speaking raw truth like that?

Donald Trump has been teaching Republicans how to fight back.  It’s like that scene in the movie Back to School where Rodney Dangerfield is asked during his oral exam what the poem “Do not go gentle into that good night” means to him.

His response: “It means…I don’t take sh*t from no one.”

And that sentiment appears to finally be filtering down to heretofore spineless Republicans.  Just look what it did to Sen. Lindsey Graham this week at the Brett Kavanaugh inquisition!

After sitting through hours of taking sh*t from Democrats who were trashing Judge Kavanaugh one after the other, Graham finally exploded in rage…

“If you (Senate Democrats) wanted a FBI investigation, you could have come to us. What you want to do is destroy this guy’s life, hold this seat open and hope you win in 2020. You’ve said that, not me. … When you see Sotomayor and Kagan, tell them that Lindsey said hello because I voted for them. I would never do to them what you’ve done to this guy. This is the most unethical sham since I’ve been in politics. And if you really wanted to know the truth, you sure as hell wouldn’t have done what you’ve done to this guy.”

Yowza!  What got into Lindsey?

The Trump Effect, that’s what.

“You called down the thunder. Well, now you’ve got it! . . . The Cowboys are finished, you understand me?! I see a red sash, I kill the man wearin’ it! So run, you cur… RUN! Tell all the other curs the LAW’S coming! You tell ’em I’M coming… and Hell’s coming with me, you hear?! Hell’s coming with me!”

As the mid-term elections approach, let’s face it, history is on the side of Democrats.  Republicans could well lose congressional seats.  They could even lose their majorities.

But for the long term, the party as a whole is finally learning how to not go gently into that good night; how to take off the gloves, throw out the Marquess of Queensbury rules, and get into a bare-knuckle street brawl with that “horrible, radical group of Democrats.”

Watch out “Spartacus.”  We’re coming.  And hell’s coming with us!

And maybe, just maybe – as Donald Trump did in 2016 by winning the White House when no one gave him a prayer of doing so – Republicans will defy history and not only keep their majorities in Congress, but increase them.  Maybe, just maybe, “The Trump Effect” will turn into “The Trump Wave” on November 6th.