There’s Something in the Air in the Mile High City 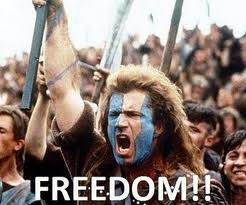 (Chuck Muth) – I’m writing this week’s column from Denver, Colorado, where there’s something in the air.

And no, it’s not the unmistakably pungent aroma of a certain weed – though I definitely got a whiff or two while walking around the 16th Street Mall downtown.  I’m talking about freedom.  And what a breath of fresh air it is!

It started at the Denver airport. Rather than getting hosed by taking a traditional taxi to my hotel, I whipped out my smart-phone upon landing and requested a ride from Uber…which probably saved me at least twenty bucks.

More so than that, the service was exceptional. My driver, Ronald, didn’t make me come outside to look for him among the flood of other cars coming and going.  Instead, he met me inside the terminal and graciously helped me with my luggage.  Try getting service like that from a taxi!

Ronald also told me how being able to drive for Uber, when he wanted and where he wanted, allows his wife to work full-time and he part-time, in between taking the kids to school, soccer practice, etc.

What a great example of increased freedom this new ride-sharing service is, for both the customer and the driver. The Soviet-style taxi cartel that has controlled passenger transportation in this country for generations, with virtually no regard to customer service, is finally being subjected to true free market competition all over the country.

But not in Nevada. Yet.

The other big change here, of course, is the legalization of the recreational use of marijuana. Prohibition is dead. Grown adults can now legally purchase marijuana for any reason and partake of it in the privacy of their own homes without worrying about being arrested and thrown in the clink for an activity far less harmful than booze.

But not in Nevada. Yet.

By the way, I’m in Denver attending the annual State Policy Network conference. This is a national association of conservative, state-based think tanks – such as our own absolutely fantastic Nevada Policy Research Institute – and you could almost overdose on freedom talk here.  In fact, the theme of the conference is “Dare to Disrupt: Unleash Freedom’s Potential.”

Such freedoms were almost unheard of just thirty short years ago.

So while there may not be a tsunami of freedom sweeping the nation, there’s at least a strong undercurrent. And it’s getting stronger. The republic has not been lost to the socialists.