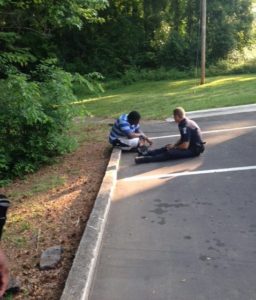 (Rachael Krishna, BuzzFeed) – “This is something that tens of thousands of police officers do every day,” were the words of Officer Tim Purdy of Charlotte Mecklenburg Police Department after coming to rescue an autistic teenager at a local high school.

The teen went running out of the campus and may have been suicidal because of a neuro-developmental disorder. It was said that he had a history of displaying violent behavior.

A photo, which went viral and caught the social networkers’ compassion, shows Officer Purdy sitting on the ground with the young man, pacifying the latter and has even made him laugh.

Purdy also made a recognition of police officers, whose duty is not limited only to seeking and seizing criminals through force to stop crimes but also to handling extraordinary situations, such as this, appropriately or without inflicting any injury or harm to the individual sought to be caught.