Tillerson, on Eve of Trip, Takes a Hard Line With Russia

Tillerson, on Eve of Trip, Takes a Hard Line With Russia
N&V Staff 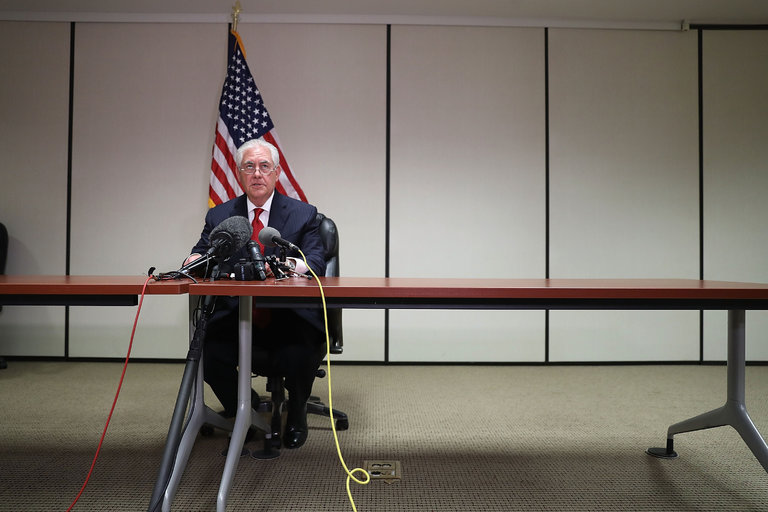 (David Sanger, The New York Times) – Secretary of State Rex W. Tillerson is taking a hard line against Russia on the eve of his first diplomatic trip to Moscow, calling the country “incompetent” for allowing Syria to hold on to chemical weapons and accusing Russia of trying to influence elections in Europe using the same methods it employed in the United States.

Mr. Tillerson’s comments, made in interviews aired on Sunday, were far more critical of the Russian government than any public statements by President Trump, who has been an increasingly lonely voice for better ties with Russia. They seemed to reflect Mr. Tillerson’s expectation, which he has expressed privately to aides and members of Congress, that the American relationship with Russia is already reverting to the norm: one of friction, distrust and mutual efforts to undermine each other’s reach.

“This was inevitable,” said Philip H. Gordon, a former Middle East coordinator at the National Security Council who is now at the Council on Foreign Relations. “Trump’s early let’s-be-friends initiative was incompatible with our interests, and you knew it would end with tears.” The Russians’ behavior has not changed, Mr. Gordon added, and they “are using every means they can — cyber, economic arrangements, intimidation — to reinsert themselves around the Middle East and Europe.”

Mr. Tillerson made it clear he agreed with that view, sweeping past Mr. Trump’s repeated insistence, despite the conclusion of American intelligence agencies, that there was no evidence of Russian interference in last year’s election. The meddling “undermines any hope of improving relations,” Mr. Tillerson said on ABC’s “This Week,” “not just with the United States, but it’s pretty evident that they’re taking similar tactics into electoral processes throughout Europe.”