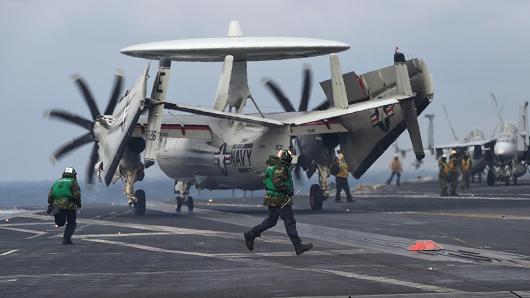 An E-2C Hawkeye lands on the deck of the USS Carl Vinson aircraft carrier during a South Korea-US joint military exercise in seas east of the Korean Peninsula on March 14, 2017. The Carl Vinson Strike Group is participating in the annual joint Foal Eagle exercise between South Korea and the US. (Courtesy: Jung Yeon-Je/AFP/Getty Images)

From attacking a Syrian government airfield on Thursday to moving an aircraft carrier group closer to North Korea on Sunday, the White House seems to be pursuing an aggressive approach to reign in rogue nations.

“Clearly, what the Syrian situation does is illustrate that the Trump administration is willing to use force,” Adrian Mowat, managing director and chief Asian/EM equity strategist at J.P. Morgan, told CNBC on Monday.

The American airstrikes on the war-torn nation took many by surprise. Trump was known for his nonintervention stance on the matter and previously warned against U.S. involvement — in 2013, the Republican tweeted “we should stay the hell out of Syria.”

Now marked down as one of the president’s numerous policy flip-flops, strategists haven’t ruled out the possibility of further U.S. action in Syria, noting Washington’s continued presence in the region.