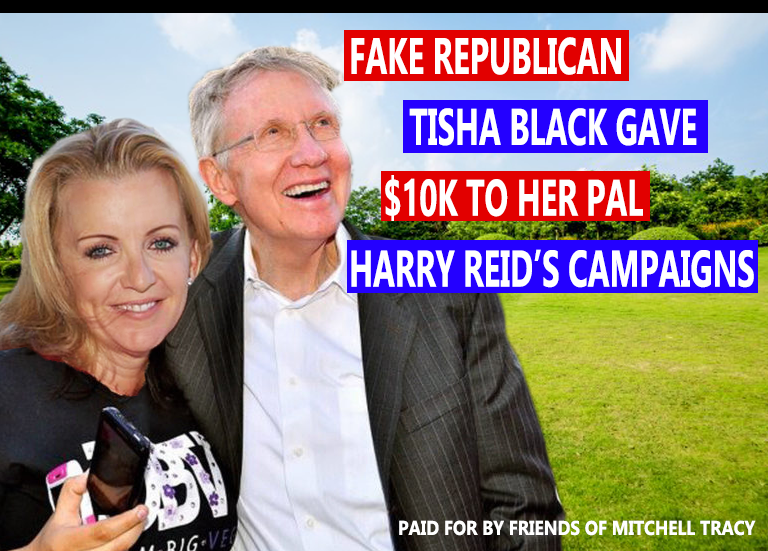 (Sigal Chattah) – My opponent in the GOP primary is actually a Liberal Trojan Horse.

While you and I fight to advance conservative candidates and causes, my opponent actually fights against us! Tisha Black actively supports and funds radical Democrats OVER Republicans and has a long history doing so.

You don’t have to take my word for it … all these tens of thousands of Tisha Black dollars to Democrats are easily verified through public documents and disclosures.

But, she doesn’t want you to know it. She hopes you won’t tell your friends, neighbors, and fellow patriots in the hopes that she can become our next liberal Attorney General, advancing the policies of Harry Reid and Catherine Cortez Masto.

Perhaps worst of all, Tisha Black was a max out donor and supporter to radical left Harry Reid. Think how many of us stood up and fought against the Reid Machine. Our grassroots. Our Republican clubs across Nevada. Our state and county parties. So many Nevadans putting it all on the line against Harry Reid and the Radical Left, and there was Tisha Black … funding it and cheerleading for our defeat.

I’m not done. Tisha Black also maxed out donations to U.S. Senator Catherine Cortez Masto who was a former Democrat Nevada Attorney General and now spends her time pushing the radical Biden/Harris agenda down our throats. See the pattern here?

I have said that liberal lawyer Tisha Black is “Sisolak’s Choice”. That’s because there is no daylight between AG Aaron Ford and Tisha Black. Governor Sisolak is happy with either of them.

I have been fighting, suing, and winning against Governor Sisolak and Attorney General Aaron Ford and I will never stop fighting for you and for our shared liberties. Please donate to our grassroots fueled campaign and help stop this Liberal Trojan Horse infiltration.

Ms. Chattah is a conservative Republican running for Nevada Attorney General.  Her views are her own.