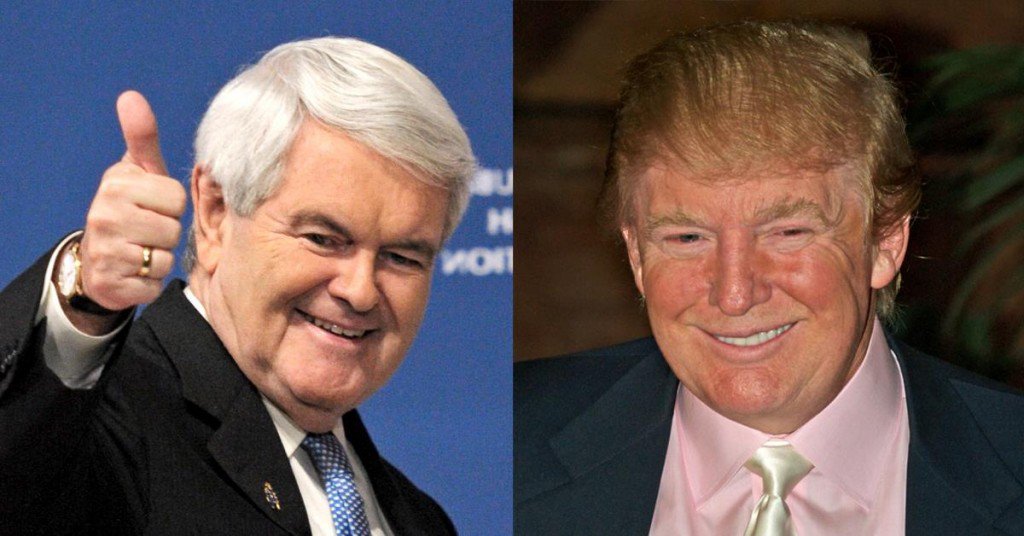 (Chuck Muth) – Since “veep” talk for Donald Trump is all the rage this week, let me throw my two cents in: Newt Gingrich.

1.)  Trump said he wants – and frankly needs – a political person who knows the congressional game as well as the players.  As a former House Speaker, Newt fits that bill to a “t.”

2.)  Newt has run for president himself and so is completely familiar with and experienced in being a national candidate.  As such, he’s also already been “vetted” to the max.  There will be no surprises.

3.)  The traditional role of the running mate is “attack dog” against the opposition.  Not that Trump needs any help in THAT department, but Gingrich would certainly make a great tag team partner on the campaign trail against “Crooked” and “Pocohantas” – though Newt will refer to them in far more genial terms.

4.)  Trump has the right instincts on a wide variety of issues, but Gingrich has thought them all the way through – and then some.  You want specifics?  Gingrich has ‘em.  In spades.  And he can articulate them in a way the “average Joe” can understand.  A great communicator in his own right.

5.)  The liberal media can and will chew up and spit out GOP running mates who aren’t ready for prime time.  Exhibit #1: Dan Quayle.  Exhibit #2: Sarah Palin.  That won’t happen with Gingrich.  He gives to the media every bit as good as he gets from the media.

6.)  Newt has spent a lifetime in politics helping candidates up and down the ballot in every state.  He also knows, understands and will assist conservative grassroots organizations, as well as state and county parties.  A true GOP party soldier who understands the nuts and bolts of building a political ground game.

7.)  He is a prolific fundraiser who has his own stable of GOP mega-donors – such as Sheldon Adelson of the Las Vegas Sands – who stand ready, willing and able to assist the former House Speaker and his running mate.

8.)  He is an admirer of the tea party and has been openly supportive of the movement.  He’s also familiar with the GOP establishment and the K-Street gang and can work with them.  He’s also proven particularly adept at reaching across the aisle and working with the opposition when the situation or issue properly calls for it.

9.)  Mitt Romney – the leader of the #NeverTrump movement – would absolutely HATE it if Newt was on the ticket.  That alone should be good enough.

10.)  He’s ready to be president.  Should Gingrich and Trump get elected, and should something happen to Trump, Newt is perfectly qualified and capable of stepping in and assuming the Oval Office.  It’s macabre to even think about it, I know.  But considering the assassination attempt on Trump in Las Vegas a couple weeks ago it’s something we have no choice but to bear in mind.

Donald Trump has famously said, “As long as you’re going to be thinking anyway, think big.”

Gingrich is a kindred spirit in that regard.  He started thinking big – thinking the impossible – way back in the early 1980s as a back-bench congressman from Georgia.  He didn’t think only about his own re-election.  He thought about the GOP taking the majority.

But he didn’t just think about it.  He took action.  And he did it.

Gingrich’s Contract with America in 1994 gave Republicans their first majority in 40 years.  Gingrich didn’t choke.  He succeeded.  And hundreds of thousands of grassroots activists have never forgotten that.

Donald Trump likes winners.  And he’s promised that if elected, America is going to start winning again.  Winning so much that we’re gonna get sick of winning.

Gingrich is a winner.  Trump-Gingrich ’16.  A winning ticket.