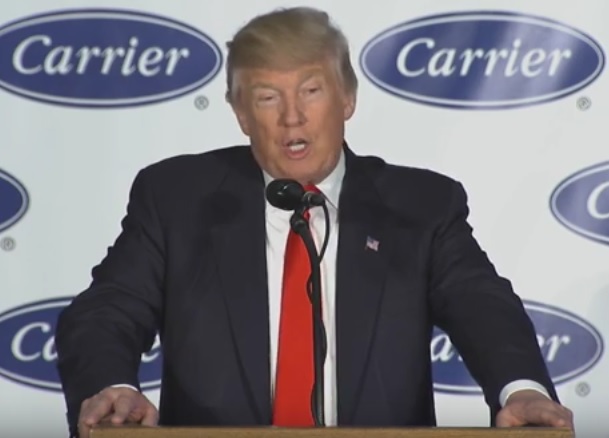 (Ben Kamisar & Vicki Needham, The Hill) – President-elect Donald Trump took a victory lap in Indiana on Thursday, celebrating his deal with Carrier to keep more than 1,000 factory jobs in the state that were slated to move to Mexico.

Trump framed the negotiation with Carrier as a signal that U.S. companies will thrive under a Trump administration, which is promising a lower corporate tax rate and fewer regulations. He promised to keep jobs in the U.S. as part of his campaign, specifically mentioning Carrier.

“I want to let all the other companies now that we are going to do great things for business, there’s no reason for them to leave anymore,” Trump said from Carrier’s plant in Indianapolis. “Their taxes are going to be at the low end and the unnecessary regulations are going to be gone.

At the same time, he also warned companies they would face “consequences” of high tariffs if they decide to move manufacturing plants overseas to ship products back to the United States.