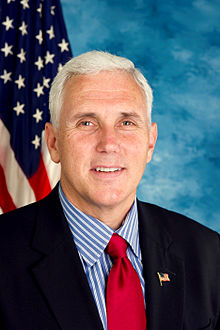 Gov. Mike Pence will meet again Republican presidential nominee Donald Trump in his state, but this time, allegations show, with the latter’s invitation to the governor to be his VP partner. (Courtesy: Wikipedia)

(Ray Steele, RTV6) – Donald Trump’s campaign will ramp up his ratings in Indiana this week as it will hold a rally on Tuesday at Grand Park Events Center in Westfield.

This is one of more than ten states where Trump zeroed out all other Republican candidates in delegates number during the primaries.

But behind this significant event of the GOP party campaign, speculations say, would be Trump’s asking Gov. Mike Pence to be his VP running mate. The issue sprouted when the governor and his family visited the Republican presumptive nominee at the latter’s New Jersey golf course last week.

When asked whether he would accept an offer from Trump, Pence said he would take it with an addendum, “nothing was offered, nothing was accepted.”

Something unexpected has got to turn out this week in Westfield rally.