Trumpmania may scare establishment into fighting for limited government

(Rick Manning, NetRightDaily.com) – July is supposed to be a relatively quiet time in Washington, D.C., but alas not this year. 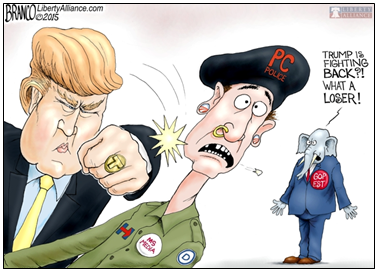 Trumpmania has struck the Capitol, but not the good kind. Political operatives and pundits are running around town like their hair is on fire trying to get in front of each other attacking the real estate magnate. What they apparently are too myopic to understand is that every time a Washington, D.C. know-it-all attacks Trump, he goes up in the polls.

Memo to D.C., when you read polls that say that people hate politicians, believe them. People, particularly those who have been Republican voters in the past, have had enough of being played for fools by the political class. People really don’t like or trust you. Now, they tolerate their existing Member of Congress the way a new dog owner accept that a puppy is going to mess on the floor.

Anyone who doesn’t understand that basic truth should have their consultant card revoked.

When you run for office again and again promising that you are going to repeal Obamacare, yet you never really planned on taking the hard but necessary steps to do it, people are going to feel betrayed.

When you run for office saying you are going to fight tooth and nail against Obama’s executive amnesty, and then cave in when the President shockingly threatens a veto, don’t expect the people you convinced to give you one more chance not to turn away in disgust.

And when you run promising to rein in Obama and then make giving him “an enormous grant of power” through fast track trade authority, the people who believed you get even more incensed.

So yes, believe the polls that say the people don’t just dislike politicians in D.C., but in fact find them to be loathsome.

Donald Trump may be a lot of things, but one thing he is not is a fool.

When a wannabe Presidential candidate attacks him, he will hit them back harder and in a much more personal way, and the public will cheer, because Trump is their proxy, punching the D.C. establishment that has broken faith with the voters in its collective nose.

How can the Republican establishment class win back the voters?

Pick some big important fights with Obama and legitimately fight them to win. Be unrelenting in your attacks on Obama’s out of control EPA, Iran nuke deal, Internet giveaway, and HUD regulation that threatens to put low-income housing into suburban neighborhoods because Obama thinks they look too white on the census map. Defund these and dozens of other programs and regulations that Obama is using to fundamentally transform the country. But not only fight, win some of these important issues to show it isn’t all just a play acting fraud perpetrated on the nation.

If the Republicans in Congress and by inference the Republican establishment as a whole gets the public rooting for them to win again, it will do wonders to restore faith in our system of government and those who are stewards over it.

If it takes a brash New Yorker to shake up D.C. enough to get them to fight for their survival, then The Donald will have made a huge difference without a ballot ever having been cast.