Reagan, Walker, and the Arc of History

Reagan, Walker, and the Arc of History
N&V Staff 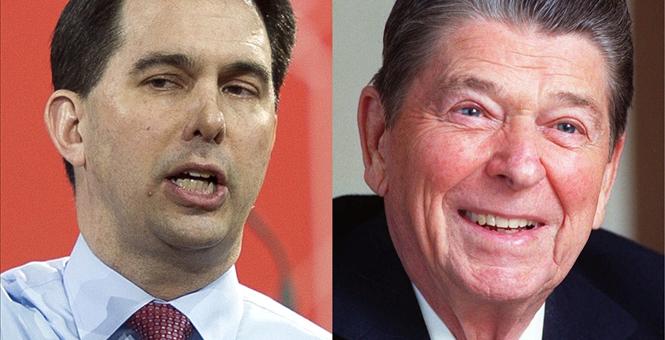 (Craig Shirley, TownHall.com) – The president was pushing hard for a nuclear deal with the sworn enemy of America despite the long-standing bad behavior of the nation’s chief adversary. They had taken hostages, exported terrorism, murdered innocents, and had behaved badly for years.

They’d been bad actors on the world stage for a long time, but the president naively believed that if we talked to them, if we reasoned with them, if we showed them America’s underbelly, then everything would be better.

Anti-Semitism was official state policy and they’d armed the enemies of Israel over the years because of anti-Semitism and because Israel was America’s most reliable ally in the region.

Even the editorial page of the usually reliable liberal Washington Post warned that the treaty was a bad deal.

Hostages, invasions, arming enemies of America, none of these things prevented the president from pushing his cherished nuclear deal with the enemy. Even in the face of skeptics in his own party, nothing would deter the president from his treasured treaty and a treaty signing ceremony on the White House lawn.

Who knew, as a bonus, there might be a Nobel Prize at the end of the day for him. And the cover of Time and Newsweek. It was enough to make most men breathe heavily. Especially presidents with their eye on immediate gratification rather than the Constitution they were sworn to defend against “all enemies, foreign and domestic.”

The GOP nomination contest was chugging along and the treaty become a major bone of contention. The conservative in the race, a governor, opposed the treaty. He believed that America was painting itself into a corner with a bad deal.

In his typical Ivy League sort of way, he let it be known that he thought the Midwesterner was a rube, that he didn’t “understand.” The elites applauded him. They couldn’t afford to let this yahoo, this rube, be nominated, much less elected, president of the United States. They organized against the conservative, writing that he was a hayseed, a bozo. Didn’t he know that all countries wanted secure borders? Didn’t he know that time had passed him by?

The governor was much like Winston Churchill in the spring of 1939. Everybody knew Hitler just wanted secure national borders and to be left alone, as long as he could rant and rave against Great Britain, America, and other enemies. Poor Winston. Time seemed to have passed him by too.

Undeterred, the governor let it be known he would do everything in his power to undo the treaty. Bush let all know that he thought the governor foolhardy and didn’t he know that all men of good will wanted peace?

The only problem was, the American antagonists were not men of good will. The governor knew what John Kennedy knew in 1961, at his inaugural saying, “For only when our arms are sufficient beyond doubt, can we be certain beyond doubt, that they will never be employed.”

The governor opposed the treaty on practical grounds. He always believed America should negotiate from a position of strength and not weakness. Hence, his fondness for the phrase, “peace through strength.”

At the time, the enemy was winning the war.

There was something very reassuring about the governor’s style and manner. Nothing seemed to muddle him, even as Bush was easily agitated, raising his voice when he got flustered, turning whiny, which was often.

An election was approaching and the future of the treaty was in the balance.

But the final judgment of the America people was “no” to the treaty. In polling, they opposed it, believing it gave up too much and there was too little verification and there had been too many years of bad blood to ever trust their enemy.

There was nothing about human rights in the treaty, nor reforms in the renegade government.

In the end, the conservative governor defeated Bush for the Republican Party’s nomination. His victory heralded a new direction for the GOP that pointed towards the future.

In the end, the SALT II treaty with the enemy went down to defeat. And the president left office, defeated, a shell of himself, a magnificent failure.

The new president was the lightweight from the Midwest.

This column was originally published on TownHall.com.