(Thomas Mitchell) – A Nevada church is asking the U.S. Supreme Court to uphold its constitutional rights in the face of bureaucratic intransigence and contradictory laws.

In petitioning the court for a hearing this past month, the Center for Justice and Constitutional Litigation (CJCL), the legal arm of the libertarian-leaning Nevada Policy Research Institute, said current law essentially forces the church to choose between its First Amendment right to freely exercise its religion and its Fifth Amendment right to due process and compensation for the “taking” by government of its private property.

It started in December 2009 when Victor Fuentes and his wife Annette, whose church owns a 40-acre tract of land surrounded by the Ash Meadows National Wildlife Refuge, learned that the U.S. Fish and Wildlife Service planned to reroute a stream that had run through their property since at least 1881. 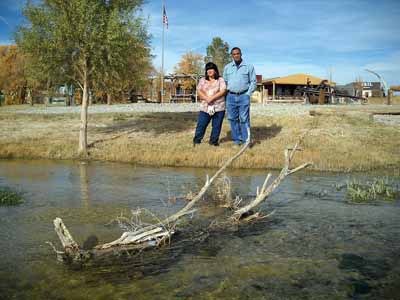 Victor and Annette Fuentes next to stream when it ran through their church camp. (Photo by Mark Waite, Pahrump Valley Times)

The property is a retreat for the Ministero Roca Solida (Solid Rock) church and the stream was one of the major attractions for visitors to what they called Patch of Heaven. It was also used for baptisms. On Christmas Eve 2010, heavy rains caused the stream to overflow its new man-made banks and flood the church property with water and mud, causing nearly $90,000 in damages to buildings and other property.

Following statutory procedures, CJCL filed a claim with Fish and Wildlife for damages. The agency never even acknowledged receipt of the claim, and CJCL filed suit.

Fuentes — a Cuban refugee who swam seven miles of open ocean in the dark from near his home in Santiago, Cuba, to Guantanamo Bay to gain political asylum — has been disturbed by the lack of justice he has received in his adopted country.

“I came to this country because I didn’t want the government’s hands on me,” said Fuentes in an interview when the litigation began. “I fled that government. That’s not the government I wanted to find here.”

Since the petition was filed with the high court, two amicus briefs have been filed in support of Roca Solida — one by the Nevada attorney general and another by the conservative Cato Institute and the National Association of Reversionary Property Owners.

“This is the powerful federal government squeezing an important but vulnerable religious ministry started by an immigrant who fled an abusive government in Cuba,” said Attorney General Adam Laxalt in a statement when his office filed the amicus. “I remain committed to protecting our state and its inhabitants from the detrimental effects of federal overreach and abuse of power.”

There is an urgency to the case, because a six-year statute of limitations is about to expire, even though the case has been languishing in various courts for most of those six years.

CJCL Director and Chief Legal Officer Joseph Becker explained, “At issue is whether Congress may confine Pastor Fuentes and his churchgoers, the victims of multiple constitutional rights violations, to seek redress in but one federal court even though no single federal court has jurisdiction to remedy each of the constitutional violations suffered.”

Congress may not abrogate by statute a right constitutionally guaranteed.

“The hallmark of an unconstitutional condition is legislation that offers relief for a violation of a constitutional right, but only through the abdication of another right …” the attorney general’s amicus brief notes. “As the Court has done for decades when parties face a Hobson’s choice in adjudicating constitutional claims, the Court should grant review and clarify that the procedural statutes in this case should be interpreted to avoid this constitutional quagmire.”

The Cato and the property owners amicus quoted a passage from on opinion by Justice William Brennan: “As soon as private property has been taken, whether through formal condemnation proceedings, occupancy, physical invasion, or regulation, the landowner has already suffered a constitutional violation, and the self-executing character of the constitutional provision with respect to compensation is triggered. This Court has consistently recognized that the just compensation requirement in the Fifth Amendment is not precatory: once there is a ‘taking’ compensation must be awarded.”

The case, though complicated and even convoluted, is hardly academic to Nevadans who are downstream from numerous federal land agencies that control 85 percent of the state and presume the power to divert streams and close roads that lead to private property.