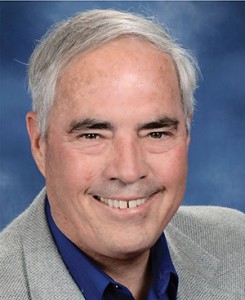 (Don Turner, Nevada Firearms Coalition) – For years, if not centuries, Western civilization has been besieged by the publication of contrived news and false reporting. With the advent of more widely distributed social media, fabricated stories have become the primary source of public information. In fact, the instantaneous release of false stories has become overwhelming. For many years, people were taught the skills of discerning truth from fiction, but lately this critical skill seems to have been “forgotten.” To his credit, President Trump has finally called the media to task with his “fake news” challenge.

If “fake news” is really fabricated, however, why do the media (who claim to be reporting on actual news) continue to push false narrative stories? This has been going on for so long it has actually become a fact of life. The answer to this question is disturbing and goes straight to the fight for the soul of this country. The so-called “mainstream media” has an agenda. They are trying to convince the American people that our Constitution and way of life is wrong and needs to be replaced by liberal socialism.

A well-known and widely respected German philosopher named George Wilhelm Friedrich Hegel (1770-1831) addressed this technique in what is called the Hegelian Dialectic. This dialectic basically says that in public opinion and action there are three states: The present situation (thesis), the opposed desired situation (antithesis) which creates tension until a resolution is obtained (synthesis). Karl Marx refined this dialectic into a process to spread his Marxist goal. Using “class struggle” he pitted people against each other until enough conflict was created to force “social change,” as it can only occur when there is conflict between people since change occurs through chaos.

Sun Tzu, the famous Chinese strategist said “strategy without tactics is the slowest route to victory. Tactics without strategy is the noise before defeat.”

So what do Hegel, Marx and Sun Tzu have to do with “fake news?” Let’s use the Second Amendment of the U.S. Constitution as an example. The writers of the Constitution, having been trained in world and classical history, knew that people are only free if they have the ability to defend themselves from an oppressive government hence the Second Amendment, which gives the citizens the right to keep and bear arms. Communism and other political systems where the government is absolutely supreme (including fascism, socialism, communism-to name a few) cannot tolerate an armed and independent citizenry. In the establishment of all dictatorships and oppressive governments throughout history, the first step taken was to disarm the population. So (a) being allowed to own firearms is the norm. (b) In order to bring a socialist order, guns must be taken away. (c) The people don’t want to give up their guns. (d) The people must be convinced to give up their guns.

The liberal strategy is to eliminate private gun ownership in the USA so only the police and military have firearms, by convincing the American public that they would be safer if only the government had guns. The tactic—“Fake News.” By using false news stories about evil firearms over and over again, the public will gradually want to give up their guns to be safe. This actually applies to all the values of America.

This process is depicted in the following chart: 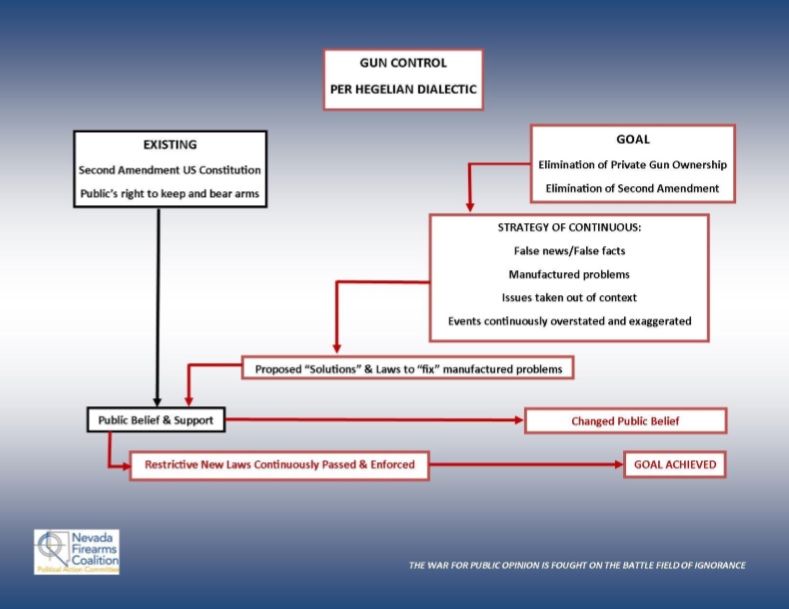 The people are exposed to a continuous stream of “fake news” utilizing false facts, manufactured problems, issues blown out of proportion or taken out of context and events continuously overstated and exaggerated. Most of the messages are couched to appeal to the emotions because under scrutiny, the facts are exposed as lies. Like an artillery barrage, the messages are pounded in all forms of social media over and over and over again until they become “true” in the minds of the citizens. In short, “fake news” is propaganda used by the socialist/communists/liberals/progressives to guide public opinion in their desired direction.

It would take more than these short pages to document all the fake stories about firearms ownership and use. Sufficient to say, for a population that has the highest number of gun ownership in the world, we have one of the lowest gun homicide rates.

The process reminds us of the story where the frog is put in water and the water is slowly warmed up until the frog is boiled. But the frog doesn’t realize it because the water is warmed very slowly. “Fake news” is the water. If we don’t want to boil, we as Americans must be aware of this process, we must be able to discern the truth, and hold those accountable who want to manipulate us. “The war for public opinion is fought on the battlefield of ignorance.” Stay informed, push back, and stay free.

Don Turner is president of the Nevada Firearms Coalition.