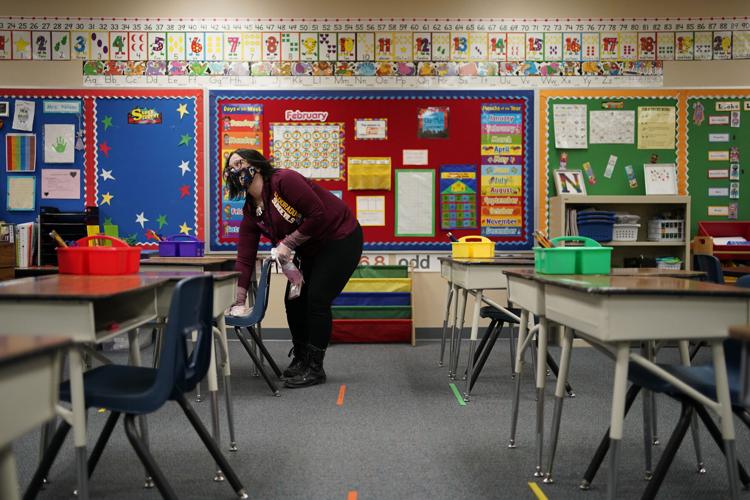 In this Feb. 25, 2021 file photo Tia Baker cleans a desk in a classroom during a media tour at Dorothy Eisenberg Elementary School, in Las Vegas.
AP Photo/John Locher

(Katelynn Richardson) – Nevada’s Interim Finance Committee has approved funding for multiple programs, including the continuation of free school meals and back pay for state employees furloughed in early 2021.

“This year may be remembered as one of the most productive years for the Interim Finance Committee – and one of the most consequential for Nevada residents,” said Governor Steve Sisolak in a statement. “I am deeply grateful to the lawmakers for their diligent work to approve programs I put forward and for the work of State employees to bring forward these spending proposals which will have immediate and lasting effects for Nevadans from housing to food security and so many topics in between.”

Universal free school meals, established in March 2020, were extended to the 2022-2023 school year by the Interim Finance Committee in June. Previously, free and reduced-price school meals were only available to families who met eligibility requirements.

Another $35 million in funding was approved to provide back pay to over 14,800 state employees furloughed in early 2021. Governor Sisolak initially proposed mandatory monthly furlough days to cut costs during the pandemic.

In May, Governor Sisolak included plans to pay back furloughed employees in his proposed 2023-25 state budget.

The committee also approved a $10 million investment in the start-up College of Medicine at Roseman University.

Additionally, $109 million was allocated to the Homeowner Assistance Fund program, which was established to provide mortgage assistance to those facing financial difficulties during the pandemic. Another $11 million was approved for affordable housing units in the Historic Westside of Las Vegas.

Less than $40 million of the state’s $2.7 billion in American Rescue Plan funding remains, according to The Nevada Independent.

In Praise of NPRI: One Man’s Story The Numbers are Finally In: Nevada GOP’s Epic GOTV Fail

How to “Fire” the Nevada GOP Chairman

Chuck MuthDecember 23, 2022
Read More
Scroll for more
Tap
How YOU Can Get Off the Sidelines and Into the Political Game