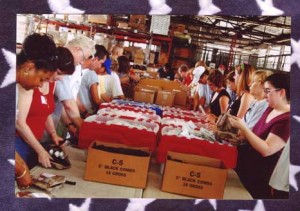 (Lori Piotrowski) – “Once you serve, you always serve.” Those are words to live by according to Douglas Bradford, director of the USO Las Vegas.

The Navy veteran, son of a Navy veteran, and father of a Navy Seal, was speaking to the Republican Women of Las Vegas yesterday, providing an overview of the organization on its one-year anniversary. Located near the A and B Gates security checkpoints at McCarran Airport, the USO Las Vegas has served more than 30,000 service men and women since its opening.

The USO, known by many for its overseas missions, has expanded beyond the stage shows a la Bob Hope. These missions are a little bit country, a little bit rock ‘n’ roll, with a little UFC thrown in for good measure. Stars such as Carrie Underwood, Toby Keith, Aerosmith, and martial arts fighters from the Ultimate Fighting Championship® regularly tour with the USO.

The USO Las Vegas organization, dedicated to serve and support families of service personnel, has some 160 volunteers, who must be screened and “badged,” and more than 200 on its waiting list. The cost to USO for each volunteer screening is $50, Bradford explained, which is why he is actively looking for other ways that the community can assist in their programs.

Eyes grew misty as he clicked through his slide presentation, showing how the USO has expanded its outreach because of the advances in technology.

United Through Reading videotapes troops reading a book to their children; the kids can follow along in their copy, just as they would if mom or dad were sitting on the bed next to them.

Operation Enduring Care provides assistance to wounded veterans, helping them to adjust to a new life, such as with modified bicycles.

Pros vs. GIJoes, again using satellite links, offers troops the ability to play video games with sports pros. Bradford related one anecdote in which a sergeant played video hoops with Shaquille O’Neal. Shaq won, of course, but he then introduced the sergeant to the game’s referee—the serviceman’s eight-year-old son.

USO in a Box is a drop service via helicopter to remote areas. The box includes a satellite so that many of the USO services may be available to troops in the field.

USO2GO is a catch-all, providing whatever the troops need whenever they request it.

Even Sesame Street is getting involved by adding a new character whose father is being deployed. This character, explained Bradford, will help young children cope with the various stages of adjustment, including grief and anger.

The service everyone equates with the USO, the Care Packages, continues its mission to supply toiletries and miscellaneous items that prove themselves invaluable to our troops.

For example, neon-colored silly string, Bradford said, is being used to help detect IEDs. As the silly string lands, variations in the string layout may indicate trip wires or buried objects. Tampons are being used as barrel plugs, keeping out sand and dust. In addition, tampons are used for stem bleeding in wounds.

Bradford encouraged participation in the organizations $1k/day program. One thousand dollars is what it costs to keep the organization viable for our troops. Smith’s grocery stores kicked off with this program with a $5,000 donation and other businesses and individuals have begun to pick up the banner.