(Thomas Mitchell/4TH ST8)You might call it the audacity of expediency. Do whatever it takes to achieve whatever you want no matter what.

In 2007 and 2008 Harry Reid scheduled pro forma sessions of the Senate every three days in order to prevent President Bush from making recess appointments for such offices as surgeon general. Bush went along with the constitutional theory. 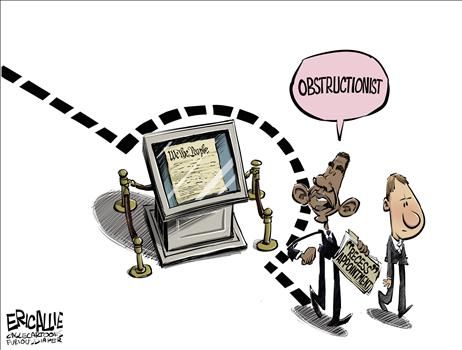 But while the Republicans are doing the same thing to prevent Obama from making recess appointments, he defies them and appoints Richard Cordray as the first chief of the Consumer Financial Protection Bureau and plans to name three others to the NLRB.

The Washington Post points out that Sen. Obama, a one-time constitutional law professor, “excoriated the practice of recess appointments” even though Bush actually waited for a real recess to make such appointments.

And Harry is no less a hypocrite when he releases a statement fully supporting Barry’s audacious action. “I support President Obama’s decision … Americans are looking to us to find common ground, not grind the business of the American people to a halt until one side gets everything it wants,” Reid said of his very own tactic. “I hope that moving forward, Republicans will work with Democrats to address the concerns of middle-class Americans, instead of turning every issue into a partisan fight” — as Harry has always done in the past, but we’re moving forward now.

A Washington Post blogger explains the legal origin of the pro forma sessions every three days can be found in a 1993 Justice Department brief that suggested the president could make a recess appointment only during a recess of more than three days. This is because Article I, Section 5, clause 4 of the Constitution says, “Neither House, during the Session of Congress, shall, without the Consent of the other, adjourn for more than three days.”

The brief reasoned, “It might be argued that this means that the Framers did not consider one, two and three day recesses to be constitutionally significant.”

That was the rationale used by Harry to block a number of Bush nominees, and Bush acquiesced.

“The hypocrisy here is blatant, even by congressional standards,” writes Andrew McCarthy at National Review Online. “In 2007, Reid kept the senate in pro forma session in order to block President Bush from making recess appointments — particularly, the eminently qualified Steve Bradbury’s appointment to head DOJ’s Office of Legal Counsel. ‘I had to keep the Senate in pro forma session to block the Bradbury appointment,’ Reid recounted in 2008. ‘That necessarily meant no recess appointments could be made.’”

Heritage Foundation’s The Foundry blog even found Supreme Court testimony by Obama’s Deputy Solicitor General Neal Katyal saying a recess appointment within three days of recess is not legal: “The — the recess appointment power can work in — in a recess. I think our office has opined the recess has to be longer than 3 days.”

The editorialists at both The Wall Street Journal and Investor’s Business Daily sensed the smell of cordite and hubris in the air.

“These appointments are brazen enough that they have the smell of a deliberate, and politically motivated, provocation,” WSJ editorialized. “Recall the stories over the New Year’s weekend, clearly planted by the White House, that Mr. Obama planned to make a campaign against Congress the core of his re-election drive. One way to do that is to run roughshod over the Senate’s advice and consent power and dare the Members to stop him.”

At IBD the writers noted Obama’s October threat that “we can no longer wait for Congress to do its job. … So where Congress won’t act, I will.” They also recalled how one of Barry’s big backers proclaimed shortly after his election that he is “ready to rule,” which prompted the remark that “kings rule but presidents are elected to serve and are accountable to Congress, the courts and the voters.”

Rules don’t apply to rulers and their vassals.