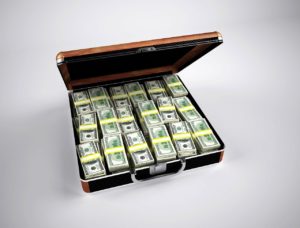 Last week I presented basic facts and issues around family income inequality in America, a hot political issue in the last decade.  Today, let’s turn to the related matter of wealth inequality.
First, the distinction between them.  Income refers to the net money or benefits we receive each period of time – typically, a week or month.  It includes pay for work; earnings from savings and investments; “transfer payments” such as social security, welfare, food stamps, health care subsidies, etc.  The sum of all those items, less the taxes folks pay directly or indirectly, constitutes income.
Wealth is the net value of all we own.  The value of our homes, bank and investment accounts, vehicles, personal property, businesses and real estate, etc., less the amounts we owe in mortgages, auto, consumer and student credit, etc.  Economists call income a “flow” variable and wealth a “stock” variable.
Two outstanding analysts at Washington’s Cato Institute, Chris Edwards and Ryan Bourne, assisted by David Kemp, produced a 74-page in-depth analysis this month titled, “Exploring Wealth Inequality.”  To best fit their findings into this column, below I quote from their summary, which has stated them far beyond my poor power to add or subtract (as Lincoln said at Gettysburg).
“Many political leaders and pundits consider wealth inequality to be a major economic and social problem. They complain about a shift of wealth to the top at everyone else’s expense and about plutocrats dominating policymaking in Washington.
“Is wealth inequality the crisis that some people believe? This study examines six aspects of wealth inequality and discusses the evidence for the claims being made.
“Section 1 describes how wealth inequality has risen in recent years but by less than is often asserted in the media. Indeed, wealth inequality has changed surprisingly little given the large economic changes in recent decades from technology and globalization. Furthermore, most estimates overstate wealth inequality because they do not include the effects of social programs.
“Section 2 argues that wealth inequality data tell us nothing about levels of poverty or prosperity and thus are not useful for guiding public policy. Wealth inequality may reflect innovation in a growing economy that is raising overall living standards, or it may reflect cronyism that causes economic damage.
“Section 3 examines the sources of wealth for the richest Americans. Most of today’s wealthy are business people who built their fortunes by adding to economic growth, and some have created major innovations that benefit all of us. The share of the wealthy who inherited their fortunes has sharply declined in recent decades.
“Section 4 looks at cronyism, which refers to insiders and businesses securing narrow tax, spending, and regulatory advantages. Cronyism is one cause of wealth inequality, and it has likely increased over time as the government has grown.
“Section 5 explains how the growing welfare state has increased wealth inequality. Government programs for retirement, healthcare, and other benefits have reduced the incentives and the ability of nonwealthy households to accumulate savings and thus have increased wealth inequality.
“Section 6 examines whether wealth inequality undermines democracy, which is a frequent claim of the political left. Research shows that wealthy people do not have homogeneous views on policy and do not have an outsized ability to get their goals enacted in Washington.
“In sum, wealth inequality has increased modestly but mainly because of general economic growth and entrepreneurs creating innovations that are broadly beneficial. Nonetheless, policymakers should aim to reduce inequality by ending cronyist programs and reducing barriers to wealth-building by moderate-income households.”
The authors title their second section, “Poverty Matters, Not Inequality,” and they show that poverty has greatly decreased domestically and around the world in recent decades – greatly due to the creation of wealth by those at the top.
As I noted last week, recent research shows that when transfer payments and taxes are included, the average yearly income of American families in the lowest income quintile (20 percent) is $50,901 and that of top-quintile families is $194,906.  That’s a ratio of 3.8:1, not the erroneous much higher figures often quoted by liberals, progressives, class warriors and mainstream media.
As my friend Joe Morabito notes: “The poor are not poor because the rich are rich.”
Prev postNext post
Related ItemsAmericaInequalityNevadaRon KnechtWealth
Opinion
Ron Knecht

Ron KnechtOctober 23, 2021
Read More
Scroll for more
Tap
The Trouble with Judges and Judging Them: Part I
Stossel: The True Meaning of Thanksgiving