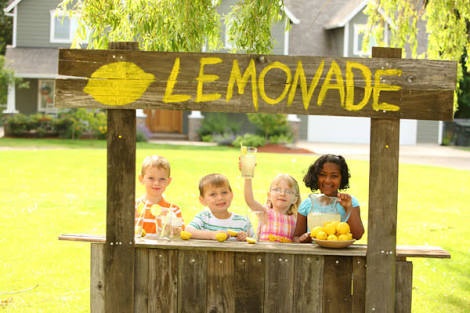 (Chuck Muth) – Once upon a time there were two little girls living on opposite sides of town who decided to earn some extra spending money by selling lemonade on weekends during their summer break from school.

Samantha lived in a gated community of upper-middle class families.  It had a well-maintained community park with lush-green grass and beautifully-manicured ball fields and was filled with families every day.

Janet lived on in a blue-collar working class neighborhood with a sparsely-used “concrete jungle” playground in such disrepair that comparatively few people used it.

Janet bought the same items to get started; however, her father decided to pay for all the replacement cups, lemons and sugar in exchange for Janet’s labor in working the lemonade stand.

On Memorial Day weekend, the girls got started.

Both wanted to make 25-cents profit per cup sold.  So Samantha priced her lemonade at 50-cents per cup since she needed money buy additional cups, lemons and sugar after her initial supply ran out.

Janet didn’t have to worry about that since her dad was subsidizing the cost of her goods sold.  On the other hand, she had a hard time selling her lemonade every day.

You see, not that many people came to the playground in her neighborhood, and even fewer – because they were on a limited budget – were willing to buy a cup of lemonade when a perfectly good and free water fountain was located near the swings.

Samantha’s business, however, was booming.  The private community park where she set up shop was filled with moms and kids every day who didn’t think twice about paying for good, old-fashioned lemonade.

But then the problem started.

Janet heard how well Samantha was doing and decided she wanted to move her lemonade stand into the same park where there were so many more potential customers who had money to spend.

From a marketing standpoint, a brilliant idea.  Hunt where the ducks are, right?

Since she didn’t live in the community, Janet went to the community’s Home Owners Association (HOA) and asked permission to set up her lemonade stand in the private park.  She pitched the board members on the benefit to their residents of her lower price.

In the interest of fostering entrepreneurship and free market competition, the board agreed.

The next weekend, Janet opened for business in the robust, private community park and immediately began siphoning off business from Samantha with her 25-cent/cup price advantage.

Understandably, Samantha was not a happy camper, especially when she found out that the reason Janet was able to undercut her prices was that her father was underwriting her operation.

So Samantha took her grievance about the “subsidized competition” to the HOA board.

She explained that it wasn’t fair that her family paid a significant monthly HOA fee that made the private community’s park so inviting to so many people while Janet’s non-resident family paid nothing towards the beautiful grounds and their upkeep.

The HOA board had to agree.  Fair was fair.

So it told Janet that she could continue to operate her lemonade stand in the private community’s park, but she’d have to pay the HOA 15-cents per cup to help pay for the park’s maintenance and repairs.

Reluctantly, Janet was forced to raise the cost of a cup of her artificially cheap lemonade to 40-cents per cup.  But she still made a decent profit because she sold a lot more lemonade in the private park than she ever did in her dilapidated neighborhood park.

For her part, Samantha was forced to find some ways to make her operation more efficient in order to lower her price to 40-cents/cup as well.  As a result, her net profit actually went up, not down.

And everyone lived happily ever after.

This, ladies and gentlemen of Congress, is the essence of the U.S. sugar program.