Where the buck stopped

Where the buck stopped
N&V Staff

Ronald Reagan: Decisions of Greatness, by Martin and Annelise Anderson

(Craig Shirley) – Years from now, presidential historians will still be saying a silent “Thank you” to Marty and Annelise Anderson and Kiron Skinner for editing Reagan in His Own Hand, Reagan: A Life in Letters, and Reagan’s Path to Victory. As a Reagan biographer, I have often quietly thanked these invaluable individuals. Now I wish to do so loudly and emphatically. Those three tomes will always be essential resources on the thinking and writing of Ronald Reagan. Two are massive books of his letters to thousands of people, and the third is a compilation of his hundreds of radio addresses over the years; all of it is material he wrote personally. 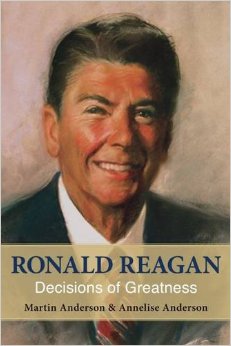 Reagan sometimes used help in writing his twice-a-week column, but he never allowed anybody else to draft his radio addresses. How important were his radio addresses? In 1977, CBS and Walter Cronkite offered Reagan a regular television commentary that would pay the Gipper hundreds of thousands. He turned it down, and his aides Mike Deaver and Peter Hannaford, flabbergasted, asked him why. (Deaver and Hannaford famously handled all of Reagan’s media appearances and speeches in the critical time from early 1975 until 1976, and again from 1977 to 1979.) He replied that people might get tired of seeing him on TV but they would not get tired of listening to him on the radio. Reagan may have been wrong in assessing people’s tolerance of his image, but it was still a courageous and impressive decision.

Marty and Annelise Anderson pored over thousands of classified documents stored at the Reagan Library to produce yet another very fine book, Reagan’s Secret War (2009), which broke new ground in the understanding of President Reagan and the Cold War. They spent several decades turning out superior scholarship, year after year.

Marty and Annelise were always very important to Ronald Reagan. They simply kept their voices down and did their work for him for many years, including in the White House. Starting in the early 1970s, Marty was a permanent part of the California mafia around the Gipper that included Ed Meese, Lyn Nofziger, Deaver, Hannaford, Stu Spencer, and honorary Californians Dick Allen and Dick Wirthlin. Time is now slowly claiming these men, including Marty, who passed away in January; Nofziger, in 2006; Deaver, in 2007; and Wirthlin, in 2011.

Marty had degrees from Dartmouth and MIT and other schools. He taught at Columbia. He wrote countless books and papers and gave countless lectures. He served on countless boards, and not just ceremonial ones but serious commissions that had genuine responsibilities on such matters as national defense, economic policy, and higher education. He probably was a legitimate genius. But he also had a distinctively dry and down-to-earth wit.

He was part of the Reagan inner circle because he was smart and conservative, but also because he was a problem solver. He gave balance and heft to the Reagan campaigns. And he has left us one last gift: the marvelous book (also co-written by Annelise) Ronald Reagan: Decisions of Greatness. It’s a brisk overview of Reagan’s presidency, with special emphasis on major decisions he faced.

The volume contains a long interview Anderson conducted with Reagan shortly after he left office. Marty asked him about a new book by CBS’s Bob Schieffer titled “The Acting President,” whose contention, Anderson noted, was that Reagan’s presidency “had nothing to do with ideology or principles, that you had no plan.” Reagan replied, “How the hell could they say this?” Reagan’s critics were always portraying him as disengaged and unaware; Marty and Annelise demonstrate the opposite throughout this book.

It’s a small volume, but, like everything that came from the Andersons, it’s important. The interview with Reagan alone is worth the price of admission. He’s out of the presidency, but he is lively, engaged, detail-oriented — everything his opponents said he wasn’t.

And he wasn’t modest either, telling Marty how many people had already come up to him — “knowledgeable people, business people”: “I can almost say in advance what they’re going to say. . . . They start thanking me for these eight years and what has been accomplished. And then some of them will tell me about where they were eight years ago and where they are now.”

Reagan was feisty in this interview; he seemed to be letting his hair down. He heavily criticized the Schieffer book, took a swipe at his old budget director David Stockman’s recently published book, and called Tip O’Neill “grumpy.”

– Mr. Shirley, the chairman of Shirley & Banister Public Affairs, is the author of two best-selling books about Ronald Reagan, Rendezvous with Destiny and Reagan’s Revolution. His third book on Reagan, Last Act, comes out in October.