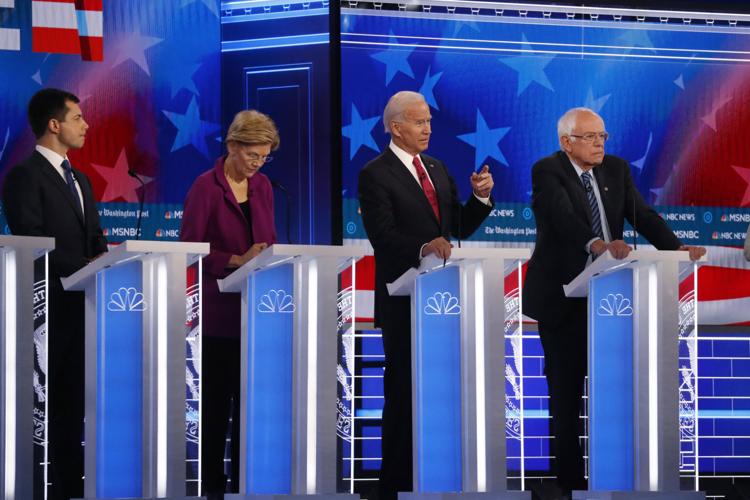 (Ted O’Neil) – Of all the public policy issues the top-tier Democratic presidential hopefuls have addressed, health care most likely stands out as the one that separates them the most.

While they agree on expanding health insurance coverage for more Americans, they remain split on how to accomplish such a goal, in particular over the issue of “Medicare For All.”

Two candidates in particular, Massachusetts Sen. Elizabeth Warren and Vermont Sen. Bernie Sanders, have been the most vocal in wanting to establish a single-payer system in which everyone would automatically be enrolled in an insurance plan where all medical expenses are paid for by taxpayers.

Their vision is to basically eliminate all private health insurance.

Former South Bend, Ind., Mayor Pete Buttigieg has taken the stance that private insurance should remain in place but eventually be discontinued, while former Vice President Joe Biden prefers to see private insurance remain in place but wants to make improvements to the Affordable Care Act. The ACA, often referred to as Obamacare, was a major policy victory during Biden’s time in office as President Barack Obama’s vice president.

With the Iowa caucuses scheduled to kick off the Democratic presidential nomination process on Feb. 3, followed by the New Hampshire primary on Feb.11, The Center Square summarizes the top four candidates’ views on health care below.

Sanders has long advocated for what many have referred to as “socialized medicine” and the elimination of private insurance.

“Yes, we should essentially eliminate private health insurance,” Sanders said. “Private insurance as it exists today is nothing more than confusing morass designed to make people jump through hoops before they can get the care they need.”

Sanders also supports creating a public option to allow people to buy into state Medicaid programs regardless of income, saying “Until we manage to Medicare For All, we should be giving states the tools they need to provide affordable, comprehensive coverage to their residents.”

On the question of illegal immigrants receiving government-run health care, Sanders said in a tweet last June that “If you are a human being, regardless of your immigration status, you have a right to health care.”

Sanders also supports increasing paid time off beyond 12 weeks under the Family and Medical Insurance Leave Act, allowing the government to produce and sell generic drugs and allowing prescription drugs to be imported from other countries.

An analysis by the Mercatus Center of a 2017 Medicare for All bill filed by Sanders found that the plan would increase federal spending by at least $32 trillion over 10 years, from 2022 through 2031.

Warren holds many of the same views as Sanders, and tweeted last year: “Yes, I would support government-run insurance. Health care is a basic human right, and we fight for basic human rights. We need #Medicare For All.”

Warren also said she is a co-sponsor of the FAMILY Act which guarantees 12 weeks of paid leave in certain circumstances.

“I also have a plan to require federal contractors to extend a $15 minimum wage and benefits – including paid family leave, fair scheduling and collective bargaining rights – to all employees.”

Like Sanders, Warren also favors the government manufacturing and selling generic drugs and allowing prescription medication from other countries.

Warren said her plan would cost an additional $20.5 trillion over 10 years and would be paid for by a wealth tax.

As mentioned earlier, Biden wants to improve the Affordable Care Act, “instead of starting from scratch and getting rid of private insurance.”

Biden has also said he supports a public option for buying insurance through state Medicaid programs.

“Whether you’re covered through your employer or on your own, you should have the choice to buy into a public option plan for Medicaid,” he has said. “If the insurance company isn’t doing you right, you should have another choice.”

“You cannot let people who are sick, no matter where they come from, no matter their status, go uncovered,” he said during the very first Democratic debate last year.

“When I lost my first wife and baby daughter in a car accident, I became a single parent to my two young sons. I’ve taken care of an aging parent. I know how hard it is to raise a family and take care of a sick family member.”

Biden’s health care plan does not explicitly support the government making and selling generic drugs, but it does propose giving samples to private generic manufacturers.

Biden also supports importing prescription drugs from other countries “to create more competition for U.S. drug corporations … as long as the U.S. Department of Health and Human Services has certified that those drugs are safe.”

Buttigieg has not come out in favor of ending private insurance, but he also has not ruled it out under a Medicare For All plan.

“I don’t see why it requires that,” he said.

Buttigieg also supports a public option for Medicaid regardless of income, but wants to see caveats placed on the ability of illegal immigrants to obtain insurance.

“Undocumented immigrants should be able to buy coverage through the public option,” his campaign has said. “I would expect that you’d have to be a citizen to qualify for subsidies.”

The candidate also said his plan would “provide subsidies to everyone who is eligible for them under the ACA, including U.S. citizens and lawful permanent residents.”

Buttigieg is on the same page as Biden in calling for 12 weeks of paid family leave, saying “Caregiving responsibilities for grandparents, grandchildren, siblings and other chosen family members will be included.”

Buttigieg does not support the government making and selling generic drugs, but is OK with importing them “in a way that ensures safety and quality.”